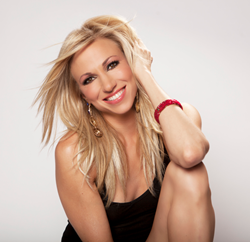 Pop Icon Debbie Gibson will be joined by the stars of “Real Housewives of New York City” Heather Thompson and Countess LuAnn De Lesseps, Actress Karen Allen, 2014 Winter Olympian and Lyme Advocate Angeli VanLaanen, and other prominent figures at the Tick-Borne Disease Alliance (TBDA) third annual gala titled “The Great Imitator Masquerade Ball” on May 1st in New York City. Kicking off May as the National Lyme Disease Awareness Month, the gala will include a festive evening of cocktails, a silent auction, dinner and awards program, featuring important messages from fellow Lyme advocates, experts and celebrities. The night will be concluded with a performance by Debbie Gibson playing some of her greatest hits for attendees of the gala.

Debbie Gibson announced two weeks ago on her official blog (http://www.debbiegibsonofficial.com) that she has been dealing with Lyme disease. “It is an elusive disease that disguises itself as many other things and creates a lot of pain and discomfort along the way,” said Debbie Gibson. “I am still in the process of undergoing treatment, but beyond just ‘glimmers of hope,’ I actually feel like me again. No disease in the body can keep the spirit from soaring, the love from pouring, and, nothing can stop the music!”

The evening will honor a group of brave individuals, all of whom have been personally affected by Lyme, including International Gran Prix equestrian jump rider and World Cup finalist Judy Garofalo-Torres, who will be this year’s recipient of TBDA’s Humanitarian Award.

“We are beyond honored to have Debbie Gibson perform at TBDA’s gala as her first public appearance and performance in support of raising the awareness of Lyme disease,” said David Roth, Co-Chairman of TBDA and Managing Director of Blackstone. “Tick-borne disease organizations such as TBDA would not be successful without the support of individuals such as Debbie Gibson who are willing to share their story and bring attention to this urgent cause and one of the fastest growing infectious diseases in the country.”

Dynamic, inclusive and passionate, the Tick-Borne Disease Alliance was formed in 2012, and since then has been dedicated to raising awareness, promoting advocacy and supporting initiatives that will lead to the eradication of Lyme and tick-borne diseases. TBDA’s current focus is on developing an accurate and reliable diagnostic test for Lyme and other tick-borne diseases.

TBDA is grateful to those who are dedicated to helping the organization raise awareness, support research, promote advocacy and increase funds for improved diagnostics for Lyme and other tick-borne diseases. For more information, and to purchase tickets, visit http://www.TBDAlliance.org, Facebook, Twitter, or call TBDA at 914-579-1000.

About the Tick-Borne Disease Alliance The Tick-Borne Disease Alliance was created in 2012 from the merger of two groups: Turn the Corner Foundation and the Tick-Borne Disease Initiative. TBDA is dedicated to raising awareness, promoting advocacy and supporting initiatives to find a cure for tick-borne diseases, including Lyme. As part of its efforts, TBDA is embarking on a quest to develop a reliable diagnostic tool as a first step toward eradicating the diseases. Working with others in the tick-borne disease community nationwide, TBDA seeks to raise public awareness through education and create a unified voice for advocacy regarding the current epidemic in order to make a real difference. More information about TBDA, Lyme and tick-borne diseases, prevention and protection can be found at http://www.TBDAlliance.org.