Former Innkeeper, Jeff Bendis, has written a funny, sarcastic, and insightful handbook on innkeeping which documents not just his transformation from "guest" to "innkeeper" but is a complete guide on how-to (and how-not-to) find, buy, run, and sell the "inn of your dreams". 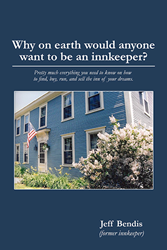 I really didn’t think I’d ever write a book about my experiences, but my activities as an innkeeper and the interaction with my guests, town administrators, neighbors, attorneys, and the like, were just too rich to pass up.

So begins a fascinating tale on innkeeping by former Clevelander (and current Woodstock, Vermont resident), Jeff Bendis and recently published by ATBOSH Media, ltd. Part memoir, part reality check, but mostly a handbook for would-be innkeepers, the book is entitled: "Why on earth would anyone want to be an innkeeper? Pretty much everything you need to know on how to find, buy, run, and sell the inn of your dreams"

As a fledgling innkeeper back in 2000, Jeff thought it would be a good idea to capture the events in his daily life as an owner of a bed & breakfast in Woodstock, Vermont.

“I really didn’t think I’d ever write a book about my experiences, but my activities as an innkeeper and the interaction with my guests, town administrators, neighbors, attorneys, and the like, were just too rich to pass up,” said Jeff, “so every night I went to my computer and dumped in the day’s events.”

Years later (after the passing of his wife Kathleen and the selling of the inn), Jeff thought about his stories, anecdotes, and the path to becoming an innkeeper and decided that these tales were worth telling - including the process of his eventually selling the inn.

“Slowly it all started to become a manuscript with a slant towards how to actually find an inn, how to buy an inn, how to run and inn, and, finally, how to sell an inn - hence the sub-title. But I felt the actual title needed to reflect the humor and sarcasm in the stories,” adds Jeff. “When I was re-reading all of the material, I asked myself, why on earth would anyone want to be an innkeeper? And there it was - the perfect title for the book.”

“The challenges we faced in relocating from the big city corporate life to being an innkeeper in a very small town, were immense and even though we thought we were prepared for the changes - we really weren’t. So, I felt that this had to be a cautionary tale as well as a handbook,” said Jeff.

Jeff’s book description mirrors the humor and sarcasm of the book itself:

After a successful career in the corporate world in his native Cleveland, Ohio, Jeff Bendis and his late wife Kathleen, took advantage of Jeff's early retirement and headed to Vermont to become the new owners of a bed and breakfast inn. Nothing in their past would have led you to believe that they weren't of sound mind. Leaving behind hoards of unbelievers and doubters, their innkeeping odyssey began and the first draft of this book followed shortly thereafter.

As the book neared publication, Jeff sought out feedback not from the literary arena but from the innkeeper world itself. What would actual innkeepers think about this look behind the curtain?

"...a well-written, amusing and informative book. If you're considering becoming an innkeeper, read this book. Then think long and hard if you want to cook creative breakfasts for innumerable guests, make their beds, clean their bathrooms, and be nice to them, even if you have a headache! For the right people, it can be a wonderful and rewarding experience."

“...wish we would have had access to this great book before we bought our inn! It’s full of wonderful information, lots of humor, great stories, and a real insight in what it's like to be an innkeeper. If you've ever thought about innkeeping as a profession you need to own this book. By far the best book I've read on this subject. Enjoy!!”

“If George Carlin had written a book on innkeeping, this would be it. Irreverent, yet insightful. Essential reading for would-be innkeepers and an eye-opener for everyone else.”

“Buying and owning a bed and breakfast are daunting tasks. Jeff has managed to cover ALL the bases, from beginning your search to running your inn. His straightforward approach, with a dose of humor, will get you through to the wonderful world of innkeeping.”

"Why on earth would anyone want to be an innkeeper? Pretty much everything you need to know on how to find, buy, run, and sell the inn of your dreams" (ISBN 9781626130081) is published by ATBOSH Media, ltd. and is available in trade paperback via Ingram, Amazon and B&N and as an ebook in Kindle, Nook, and iBook formats.