With the World Cup starting June 12, soccer fans at Fado Irish Pub are more excited than ever this spring to gather with other fans as their favorite stars- and Europe’s best club teams- go head-to-head for the prestigious European trophy. Fadό in Chinatown is a popular destination spot for soccer fans year-round and anticipates a capacity crowd for the biggest Club competition of the year, the UEFA Champions League Final. 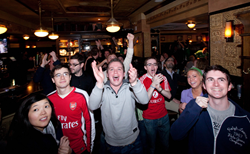 What: Warming up for the World Cup, soccer fans are more excited than ever this spring to gather with other fans in soccer bars to watch the best players in the world and their club teams go head-to-head for the prestigious European trophy. With the likes of legendary clubs such as Real Madrid, Barcelona, Chelsea, Manchester United, Bayern Munich playing (to name a few), the tournament teams have drawn record crowds throughout the soccer season. Fadό in Chinatown, the premier destination spot for soccer fans year-round since 1998, is once again anticipating a capacity crowd for the biggest European Club competition of the year- the UEFA Champions League Final on May 24.

Fadό will support loyal soccer fans with upgraded state-of-the art audio visual equipment and a full brunch menu available until 3pm. Viewers will arrive early to secure a table and enjoy food and drink specials. Passionate soccer fans in DC have come to expect an energized atmosphere that includes a live feed with sound on multiple HDTVs and supporters wearing their colors with pride. To understand more of what makes Fadό an essential part of the soccer experience in DC, come see the UEFA Champions League Final on May 24.

Media Opportunities:
This spring, Fadό will be crowded with expats and American soccer fans alike, enthusiastically supporting their teams and watching the title race in the Premier League, FA Cup and Champions League Final. This is the perfect opportunity to preview what World Cup will mean to soccer fans of all nationalities and interest levels. Interviews and photo opportunities available.