April Shenandoah has gone from show business to God’s business, which has never been more evident than in her latest book, “Your Tongue Determines Your Destiny” (Harrison House Publishers). Originally released in 2012 with a Foreward by Charles Capps, an all-new audio book version released this month, available at Audible and Amazon, among others. 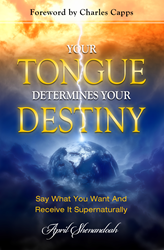 April Shenandoah has gone from show business to God’s business, which has never been more evident than in her latest book, “Your Tongue Determines Your Destiny” (Harrison House Publishers). Originally released in 2012 with a Foreward by Charles Capps, an all-new audio book version released this month, available at Audible and Amazon, among others.

“Show business literally was my God, until I met God,” says April. “When I first went to Hollywood, Roy Rogers and Dale Evans took me under their wing, and they tried to steer me on the right path. But it wasn’t until some years later while watching Pat Robertson’s “The 700 Club,” that it felt like lightning came through the roof and zapped me!“

April’s life changed drastically. She was appointed the Los Angeles press contact for Pat Robertson’s 1988 presidential campaign. This new political appetite led to her long-running weekly column, “Politics and Religion,” and her own TV cable show, “The Bottom Line.” Soon, she had thoughts of running for Congress.

“I wanted to save the world,” laughs April. “But I quickly learned my attempt to fix it through politics was futile. God had another plan. But I still felt at that time that I was a cross between Debbie Reynolds and Margaret Thatcher. Until God gave me a lesson in faith that catapulted my faith to new heights, teaching me to walk in the supernatural. I became passionate about wanting others to understand that Almighty God has given us power and authority in Jesus’ name to speak things into being, and to end chaotic living, to rise up and be healed.”

This passion led to her latest book, “Your Tongue Determines Your Destiny.” April shares her amazing lesson in faith, and reveals her miraculous healing of rheumatoid arthritis, and the serious illness that brought her near death while writing the book’s healing chapter, “Talk Yourself Well.”

“Preachers preach that ‘life and death are in the power of the tongue,’ but most of God’s people are not taking it literally,” says April. “Our words are power in action, and most of us think and speak like we’re spitting in the wind – and we don’t have a clue where that spit might land. We are a power plant, and our mouth and the words that we speak are the switch.”

In “Your Tongue Determines Your Destiny,” April teaches how we as believers are not practicing one of the most basic Biblical principles - ask, believe, and receive. You will learn that your life mirrors what you speak, producing fruit, be it rotten or sweet. Positive thoughts lead to positive speech and vice versa when it comes to negative thoughts. Learn how you can reverse your situation by changing your speech habits today.

April Shenandoah is a former actress, political activist and television host. Today, she is a popular author and a minister with Ambassador of Prayer Ministries. For more information, visit http://www.aprilshenandoah.com.