On Saturday, May 3, 2014, at 11:00am, Dr. Joel Parrott, President & CEO of Oakland Zoo, will accept the dedication of a bronze elephant statue from the Snow family, in memory of Sidney A. Snow. 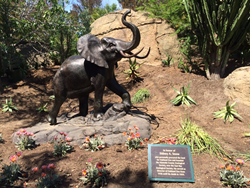 On Saturday, May 3, 2014, at 11:00am, Dr. Joel Parrott, President & CEO of Oakland Zoo, will accept the dedication of a bronze elephant statue from the Snow family, in memory of Sidney A. Snow. The special ceremony will take place inside Oakland Zoo along the pathway leading to the elephant exhibit. During the commemoration, Barbara Snow Clark, daughter of Sidney Snow, will speak on behalf of the Snow Family. “I am thrilled to present to the Oakland Zoo, this memorial to my father Sidney Snow, the founder of the Oakland Zoo,” said Barbara Snow Clark. “Thanks to the efforts of Dr. Parrott and his wonderful staff, my dream of a permanent memorial has been realized.”

During the event, Mrs. Clark will also share stories about her father’s devotion to the zoo, his love of animals, and the fondness he had for an elephant named “Effie,” who was considered part of the family in the 1950’s. Following the dedication, a private reception will be held in honor of the Snow Family.

ABOUT OAKLAND ZOO:
The Bay Area’s award-winning Oakland Zoo is home to more than 660 native and exotic animals. The Zoo offers many educational programs and kid’s activities perfect for science field trips, family day trips and exciting birthday parties. Oakland Zoo is dedicated to wildlife conservation onsite and worldwide. Nestled in the Oakland Hills, in 500-acre Knowland Park, the Zoo is located at 9777 Golf Links Road, off Highway 580. The East Bay Zoological Society (Oakland Zoo) is a nonprofit 501(c)3 organization supported in part by members, contributions, the City of Oakland and the East Bay Regional Parks. For more information please visit our website at http://www.oaklandzoo.org.
###