What Future for Colombia? The Millennium Project to Discuss Potential Futures Just Before the Country’s Upcoming Presidential Elections

In the framework of the Bogotá International Book Fair, Colombia´s Caribbean Observatory will hold an open public discussion and present “Latin America 2030” and “2013-14 State of the Future” reports produced by The Millennium Project. 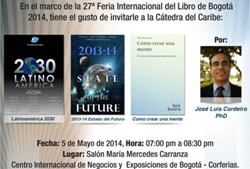 The Millennium Project at the Bogota International Book Fair

What future for Colombia? This is a very timely question just before the upcoming Colombian elections

The recent “2013-14 State of the Future” report shows that the world is improving more than the majority of pessimists acknowledge, but the future dangers are worse than the majority of optimists indicate. The global situation for humanity continues to improve in general, but with many trade-offs. For over 15 years, the Latin American Nodes of The Millennium Project have been active participants in the production of the “State of the Future,” an annual report card on the future of the world.

“Latinoamérica 2030”, another report by The Millennium Project, discusses four possible scenarios about the future of Latin America. The report utilizes the bicentennial independence celebrations in the majority of the region to present diverse good and bad possibilities for Latin America over the next 20 years. It has relevant narratives that take into account the events identified by an international panel of experts, including some which are less probable, but imply great impact (i.e., the so-called “black swans” or “wild cards”). The report also addresses the implications of China as a rising world power and the perspectives of Brazil as the most influential Latin American country.

“What future for Colombia? This is a very timely question just before the upcoming Colombian elections,” notes José Luis Cordeiro, who will lead a public discussion at the Bogotá International Book Fair, on May 5, 2014, at 7 pm, at the invitation of Beatriz Bechara de Borge, Executive Director of Colombia’s`Caribbean Observatory in Cartagena, Colombia. Mr. Cordeiro will present the two reports produced by The Millennium Project as well as the new Spanish edition of Ray Kurzweil’s latest best-seller, “How to Create a Mind,” of which he wrote the prologue. José Luis Cordeiro is director of the Venezuelan Node of The Millennium Project and works with Dr. Kurzweil at Singularity University at NASA in Silicon Valley, California.

Colombia’s Caribbean Observatory is a think-tank founded in 1997 whose mission is to generate high level knowledge, promote debate and produce proposals to improve the quality of life of the inhabitants of the Colombian Caribbean. Additionally, it widely disseminates its intellectual production and participates effectively in the collective construction of a shared vision for the future of the region. Colombia´s Caribbean Observatory is supported by seven universities and four chambers of commerce in the region.

The Millennium Project is a global think-tank founded in 1997 with international participation which produces the annual State of the Future reports, the Futures Research Methodology series, the Global Futures Intelligence System (GFIS) with related software, and specialized studies. The Millennium Project has 50 Nodes worldwide which identify participants, translate questionnaires and reports, and carry out special studies, workshops, symposiums and interviews to promote advanced training. The mission of the Millennium Project is to improve the humanity’s future and make this knowledge available through a variety of feedback mechanisms, with the objective of accumulating knowledge about the future in order to make better decisions in the present.

The Bogota International Book Fair, which has been held since 1988, is the most important event promoting reading and the editorial industry in Colombia. It is one of the most important publishing events in Latin America, in which writers, books and readers become the protagonists of the cultural scenario of the country each year, making Bogota the city that sponsors Colombia’s most important reading-fest.