Children Were Checkmating Breast Cancer at a Chess Tournament in Northern, California

Everybody was a winner at the Breast Cancer Research Chess Tournament in Fremont. 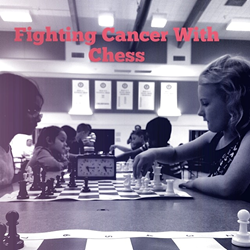 Having Steve and Kate's Camp at the event helped to create the chess festival atmosphere that Torres Chess and Music Academy tournaments are known for.

On Saturday May 3, 2014, scores of children attended the Annual Breast Cancer Research Tournament held by the Torres Chess and Music Academy. In addition to the standard trophies and medals that are ubiquitous at scholastic chess tournaments, all attendees were treated to fun activities by Steve and Kate's Camp who was the corporate sponsor for this event.

"Having Steve and Kate's Camp at the event helped to create the chess festival atmosphere that Torres Chess and Music Academy Tournaments are known for. In addition, their sponsorship made it possible to raise money for breast cancer research while improving the overall presentation of the tournament." -Chris Torres

In addition to Steve and Kate's Camp counselors, there were plenty of TCAMA chess coaches on hand to help the children use this tournament as a means toward improving their chess. In particular, James Paquette was especially busy analyzing chess games and teaching notation to the younger chess players. Chris Torres described his Director of Instruction by stating that, "James Paquette is a natural educator whose love for the game of chess captures the imagination of nearly every child he instructs."

The site for the Breast Cancer Research tournament was the campus of Mission San Jose Elementary School in Fremont, California. MSJE is the home of the 2013 National Elementary Chess Champions as well as the host school for the famous Fremont Summer Chess Camp. Students from MSJE didn't let their national titles dissuade them from attending a local chess tournament that raised money for a great cause. Many MSJE students were in attendance proudly wearing the “Blue Team Shirts” which list the titles from a State Championship Dynasty that spans several decades.

For more information on this tournament, MSJE Chess and the Torres Chess and Music Academy, please visit http://www.ChessAndMusic.com.