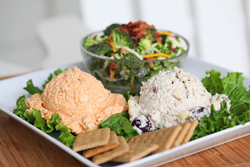 “We are so excited to open a Savannah location and add it to the growing Chicken Salad Chick community throughout the Southeast,” said Kevin Brown, president of Chicken Salad Chick. “The city of Savannah certainly embodies the southern charm that we strive for in our restaurants, so we have been looking forward to bringing our concept here.”

The Savannah restaurant, set to open in August 2014, is owned by franchisees Tim and Kelly Paslawski. This location will be their first of two Savannah restaurants, as well as one in Hilton Head, SC. “We fell in love with Chicken Salad Chick over two years ago and knew we had to be a part of this wonderful family,” said owner Kelly. “Tim and I are delighted to be sharing such a superb experience with the hostess city of the South. We think Savannah is going to fall in love with this concept, just as we have!”

Born In Alabama -- The Chicken Salad Chick concept was established in Auburn, AL in 2008 in the kitchen of founder, Stacy Brown. Stacy quickly learned that selling a homemade recipe from her kitchen is against the law, and after being shut down by the health department, she decided to solicit the business expertise of her future husband and fellow founder, Kevin Brown. Together, they opened a small takeout restaurant which quickly grew to enormous demand and additional locations. The unique concept puts an edgy twist on a southern classic by offering customers a “custom-fit” chicken salad experience, with 15 original flavors to choose from, as well as gourmet soups, flavorful side salads and freshly-baked desserts. Chicken Salad Chick has sold 85 franchises to be developed across the states of Alabama, Georgia, Florida, Tennessee, and North Carolina & South Carolina, and has plans to expand nationally in the coming years.

About Chicken Salad Chick
Chicken Salad Chick, the nation’s newest, fast-casual restaurant concept, is led by experienced food and operations executives. The concept puts an edgy twist on a southern classic, offering customers a “custom-fit” chicken salad experience, with 15 original flavors to choose from, as well as gourmet soups, flavorful side salads and freshly-baked desserts. Corporate offices are located at 724 North Dean Road in Auburn, Alabama. Recently, the franchise has been expanding to other cities throughout the Southeast, including Alabama, Florida and Georgia. See http://www.chickensaladchick.com for additional information.