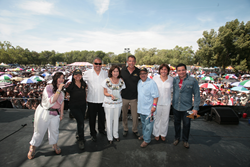 The historic Cinco de Mayo festival lived up to its status as the nation’s largest in yesterday’s celebration, when it marked its 35th consecutive year with tens of thousands of passionate Angelenos turning Whittier Narrows Regional Park in South El Monte into a giant celebration of Latino culture, music and heritage.

Sponsored by Vallarta Supermarkets and organized by Del Rey Entertainment in conjunction with Liberman Broadcasting, the annual Whittier Narrows Cinco de Mayo festival creates a vital sense of tradition, positivity, pride and unity among the Southern California Hispanic community, as well as having an invaluable economic impact on surrounding businesses.

Marking victory at the Battle of Puebla on May 5, 1862, Cinco de Mayo is broadly recognized as a celebration of Mexican culture and tradition.

The Mexican American Opportunity Foundation (MAOF) was selected as the non-profit beneficiary for this year’s Whittier Narrows festival, with Del Rey Marketing donating a portion of proceeds towards the organization’s mission to provide for the socio-economic betterment of the greater Latino community of California, while preserving the pride, values and heritage of Mexican American culture.

“We are very pleased to collaborate with Del Rey Marketing on such important and significant events,” said MAOF president Martin Castro before the festival. “We also look forward to using the festival to inform attendees on the community services we offer.”

This year’s event included former United States Secretary of Labor Hilda Solis receiving the Orgullo Latino Spirit Award, which honors an exemplary individual who is making a difference in the Latino community. Presented by Del Rey Entertainment and the MAOF, the award recognized Solis’ extraordinary contribution to the Latino community and courageous leadership in healthcare, the environment, and clean energy solutions.

“I am so honored to receive this award,” said Solis, who was the first Hispanic woman to serve in the California State Senate, upon receiving the award from Castro. “It was a great pleasure to share it with this community at such a spectacular event.”

A new feature of the festival this year was a dedicated Health Pavilion, a unique exhibit area offering free health screenings, information on Covered California and the opportunity to enroll on-site with various providers, an interactive zone for kids, educational materials, nutrition samples and giveaways.

“We are thrilled to partner with Vallarta Supermarkets and continue their tradition of connecting with Hispanic consumers by staging further successful and historic events in the County of Los Angeles,” said Chris Del Rey, president of Del Rey Marketing and Del Rey Entertainment.

Tickets for the free Whittier Narrows Cinco de Mayo Festival and upcoming Mexican Independence festival scheduled for September 14th are distributed throughout California at 44 participating Vallarta stores, as well as at MAOF offices.

For further information on the event and sponsorship opportunities please contact:

About the Mexican American Opportunity Foundation

The Mexican American Opportunity Foundation (MAOF) is a non-profit, community-based organization that was established in 1963 in order to serve disadvantaged individuals and families in the Los Angeles area. MAOF is the largest Latino-oriented, family services organization in the United States, and has achieved this status by providing high quality social services and programs to those communities where the need is the greatest.