Bedell negotiated the purchase the world’s largest collection of completely legal, certified CITES-compliant Brazilian rosewood in the world, for use in our highest end instruments. 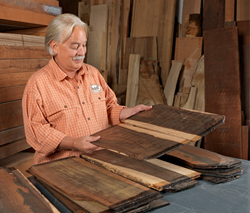 These tone sets were cared for by experts for over 50 years in Spain.

When you think of the most prized tonewood in the world, what comes to mind? If you’re like most luthiers, musicians and collectors, you automatically think Brazilian rosewood, the universally coveted, exceptionally rare and heavily regulated tonewood.

Bedell's stock of Brazilian rosewood is not only legally certified, exquisite, and rare, it is completely stable due to the number of years these sets cured in a perfect climate prior to acquisition. These tone sets were cared for by experts for over 50 years in Spain before being transferred to the wood experts at Bedell.

A few of the offerings of Brazilian rosewood in the Bedell collection include:

The Milagro
Milagro is Spanish for “miracle” and rightly so. The Milagro is a spectacular Brazilian rosewood tree that is estimated to have germinated in the early 1600s. It grew in in the area of Linhares, state of Espiritu Santo, on a hillside. Lack of water caused slow growth and resulted in very unique spider webbing. Mother Nature blessed this spectacular 400-year-old Brazilian wood with unparalleled aesthetic and beautiful tonal qualities. When struck, it can resonate with unmatched sustain and projection

Esperanza
Exceptionally dark, with occasional red streaks and exquisite spider webbing, the Esperanza sets are easily 500 years old. It is rumored that these trees were found on the ranches owned by the facenderos in Brazil, left lying next to rivers, and it is assumed that the nutrients from the rivers contributed to the beautiful, deep chocolate-brown coloration. This incredibly exquisite wood has a rich glass-like tap tone that exhibits the very finest Brazilian rosewood tonal properties available today.

Puerta de Iglesia
This collection of strikingly beautiful tone sets exhibits a contrasting-sapwood pattern known in Europe as puerta de iglesia or “church doors.” The name comes from a tale about a famous guitar maker Miguel Rodriguez of Cordoba, Spain, who in the 1970s, came into possession of an old large church door that exhibited contrasting sapwood and built a series of guitars from the doors.

Bedell's Puerta de Iglesia sets have a large amount of light colored sapwood present on the back and sides. This healthy sapwood is tonally equal to the darker heartwood. The perfectly book-matched backs accentuate the sapwood grain in a wonderful way. The end result is a guitar that a beautiful piece of natural artwork as well as a fine instrument.

Bedell Guitars are rooted in the simple belief that extraordinary acoustic guitars can be crafted from the world's most precious tonewoods in complete harmony with sustaining our forests and honoring the indigenous cultures and economies that live among them. At Bedell, it's all about the wood – knowing where your instrument comes from and knowing that the woods were obtained responsibly. The journey at Bedell Guitars is far different from other acoustic instrument builders. It starts with a commitment to appreciate every individual tree used in our guitars: where and when it germinated, the length of its life, and how it was salvaged. We then thoughtfully and responsibly handcraft our instruments entirely in the U.S.A. We're committed to complete transparency, from seed to song.​