Tom Voss, chairman, president and CEO of Ameren, who will retire in July, shares insights on why he purposefully reshaped the utility’s culture to restore it to top-tier performance in a new video by culture-shaping firm Senn Delaney, a Heidrick & Struggles company. The video interview is the latest in Senn Delaney’s view from the top CEO video series on leading culture change. 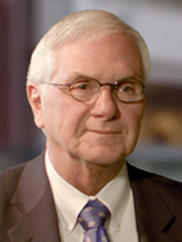 It’s been a real turnaround financially. In fact, our financial performance is probably the best it’s ever been compared to our peers, probably at least in the last 20 years.

Ameren Chairman, President and CEO Tom Voss, who will retire from utility in July 2014, discusses the success of a culture transformation, called ‘Project Unfreeze" to restore Ameren to top-tier performance in a new ‘view from the top’ CEO video interview published by culture-shaping firm Senn Delaney, a Heidrick & Struggles company.

St. Louis-based Ameren, a generation, transmission and distribution utility providing energy services to approximately 2.4 million electric customers and 900,000 natural gas customers in Illinois and Missouri, underwent a significant culture transformation in recent years under the leadership of CEO Tom Voss. He describes his efforts to restore the company to winning high performance after some turbulent years in the latests ‘view from the top’ CEO video interview published by culture-shaping firm Senn Delaney, a Heidrick & Struggles company.

Voss states in the video interview that he had four clear ‘winning’ goals for Ameren that he hoped to achieve through creation of a culture driven by an inspiring purpose, greater accountability and alignment: continuous improvement in safety, and reaching top tier performance in customer satisfaction employee engagement and total shareholder return.

According to Voss, the culture change initiative has been a success. “If you look at the way our culture is today, it’s significantly different than it was six or seven years ago,” he says. “It’s been a real turnaround financially. In fact, our financial performance is probably the best it’s ever been compared to our peers, probably at least in the last 20 years,” says Voss. “Our nuclear plant performed extremely well. It’s one of the best in the country. Our reliability was an all-time best last year. So, almost all aspects of the company now are performing at a very high level.”

The latest video featuring Ameren is part of Senn Delaney’s CEO thought leadership video series on leading culture change. Other CEO view from the top videos can be viewed at SDTV, a video forum for sharing engaging case studies and best practices of interest to CEOs, executives and senior business leaders on why organizational culture is a key driver of business performance.

About Senn Delaney
Founded in 1978, Senn Delaney, a Heidrick & Struggles company, is widely recognized as the leading international authority and successful practitioner of culture shaping that enhances the spirit and performance of organizations. Senn Delaney's passion and singular focus on culture, combined with decades of hands-on experience, have resulted in a comprehensive and proven culture-shaping methodology that engages people and measurably impacts both the spirit and performance of organizations. Learn more about Senn Delaney