Shahar Pe'er One of 14 Women Recognized at Prestigious Event 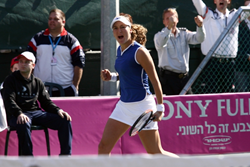 Israel Tennis Centers alumna and top ranked Israeli tennis player Shahar Pe’er was chosen to participate in this year’s Israel torch lighting ceremony marking the close of Israel’s Memorial Day event and the start of the Independence Day celebration. Widely regarded as Israel’s most successful tennis player of all time, Shahar was one of fourteen honorees selected for the ceremony, honoring the “Era of Women”, each of whom has contributed in her own special way to society and the State of Israel.

Shahar began playing tennis at the age of six when she joined her brother Shlomi and sister Shani in tennis lessons at the Israel Tennis Centers – Tel Aviv (Yad Eliayahu), under the guidance of ITC Coach Igal Gipsh. She won her first title at the age of 12 when she captured the Eddie Herr International Doubles title and reached the singles finals at the same event. She progressed quickly, reaching the ranking of 11th in the world at the height of her playing career.

Sharar is the third ITC representative to be recognized with the torch lighting honor. Her predecessors are Dr. Ian Froman, winner of the Israel Prize in 1989 and one of six founders of the ITC, and Fahoum Fahoum, an Arab tennis player from the ITC – Haifa, son of ITC Board member Wafa Fahoum, who was not only an outstanding player but was also a member of ITC’s youth exhibition teams.

The ITC is one of the largest social service organizations in Israel, helping over 20,000 children every year to become not only better tennis players but better human beings. Through its social impact programs, a wide range of children are served, including youth at risk, immigrants and children with special needs, from autism and ADHD to Down Syndrome as well as those with developmental and physical disabilities. Tennis also has the unparalleled ability to bring together children from different religions in coexistence programs, promoting understanding, cooperation and friendship on and off the court. In addition, the ITC nurtures generations of tennis champions who regularly compete on the professional circuit, serving as ambassadors for Israel around the world.

The torch lighting ceremony was broadcast live on Israeli television and major radio stations. In preparation, the plaza were decorated with symbols of the 12 Tribes, and special lighting, audio, visual and pyrotechnic systems were installed to create a special atmosphere. It ended with a spectacular fireworks display and performances by folk music bands as Israel moved into its Independence Day.