The File Depot is pleased to announce its attendance at the 2014 International Franchise Expo, June 19-21. 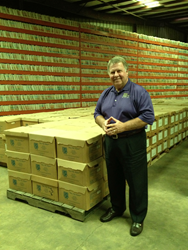 Senator A.G. Crowe at a The File Depot location

We’ve signed 7 new franchise agreements this year, 4 of which were from the Houston show.

The File Depot, the Slidell, Louisiana based records management franchisor, today announced that they will be attending the 2014 International Franchise Expo in New York on June 19-21st.

“We had a phenomenal experience at the Franchise Expo South in Houston this year,” said The File Depot COO Rob Perry. “We have added several franchisees in the greater Houston Market from the show, and we plan to do the same thing in New York. “

The File Depot offers an array of business-to-business services including secure records storage, confidential document destruction, as well as document scanning and digital delivery. They currently have 26 locations in 8 states, and are opening sites throughout the United States.

“We’ve signed 7 new franchise agreements this year, 4 of which were from the Houston show,” said Beacon CEO Charles Franklin. “File Depot’s strong value proposition, low cost of entry, as well as their proprietary management software which automates much of the business and allows for a low employee count makes for a very attractive offering. Combine this with fantastic validation from existing owners and we have a powerhouse brand which we anticipate being very well received at the IFE.”

Interested parties can meet the executive team of The File Depot at the Franchise Expo South at booth #1015,or visit http://www.franchisebeacon.com/clients/the-file-depot.