Polar V800 in black is due out in two weeks and judging by advanced sales it is going to be the summer's hot new triathlon watch according to the Heart Rate Watch Company. 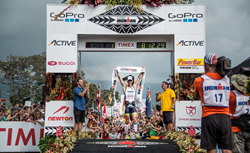 Advance sales of this product have been very strong because people read the specifications and they fully understand that this watch is going to be something special...

V800 has created more excitement and buzz than any multisport or triathlon watch for 2014 says the Heart Rate Watch Company.

"This is all for good reason because it adds Bluetooth Smart, mobile connectivity, heart rate in the water and advanced heart rate variability data to the mix," says Rusty Squire, president of the Heart Rate Watch Company. He adds, "Advance sales of this product have been very strong because people read the specifications and they fully understand that this watch is going to be something special."

"Polar does not come out with new heart rate monitors or GPS watches very often, but of those introduced in the past 4 years not a single other has generated this much buzz," says Squire. He adds, "It helps that the reigning World Ironman champion uses the watch in his training because it adds credibility."

"These are the first triathlon watches from Polar that features mobile downloading to the Polar Flow app," says Squire. He adds, "It also has a long battery life and is built tough with a Gorilla glass crystal for durability.

"V800 gets heart rate in the water and all major swim, bike and run metrics," says Squire. He adds, "It also tracks all activity 24/7, offers recovery analysis and measures beat-by-beat heart rate data."

"Polar V800 in black is scheduled to be shipped to dealers around May 20th meaning that customers should be able to have them in late May," says Squire. He adds, "The blue color option has been pushed out until early July."

"We've been telling customers to get their advance orders in now if they want early units because this watch is very popular," says Squire.

Talk To The Experts

"If you would like to talk with an expert about the Polar V800 then simply call us toll-free at 866-586-7129," says Squire. He adds, "We think you'll appreciate talking with folks that actually test and use the products they sell."

Polar V800 Can Sync Wireless With iPhone and Android

Polar V800 Can Receive Heart Rate In The Water