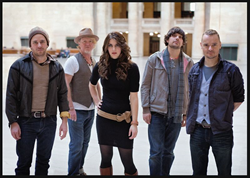 We look forward to welcoming guests from around the world . . . we have hosted guests from 38 different states and five different countries.

From internationally touring musicians and local dancers to traditional artisans and Highland games, the Iowa Irish Fest promises three days of fun, food, culture and music for thousands of residents and visitors.

Beginning at 4 p.m. on Friday, Aug. 1, and continuing through 5 p.m. on Sunday, Aug. 3, the Iowa Irish Fest will infuse Lincoln Park, E. 4th and Lafayette Streets in downtown Waterloo, with the sights, sounds and flavors of Irish heritage.

“We’re very excited to present another weekend of Irish music, food, dance, sports and culture,” said festival director Rory Dolan Sr. “We have grown in attendance every year and feel we will continue to do so this year with the entertainment lineup that we’ll showcase. Although we mainly draw guests from the Midwest, we look forward to hosting guests from across the nation and around the world. In the past we have welcomed visitors from 38 different states and five different countries.”

Four stages will feature over 20 local, regional and internationally touring performers. The Park Avenue stage will host headliners in Lincoln Park. The Lincoln Savings Bank stage will host more traditional acts on E. 4th and Lafayette. And Jameson’s Public House on E. 4th Street will host a third performance stage. There also will be a Cultural Events Center Stage in the east corner of Lincoln Park.

Gaelic Storm will once again headline all three days of the festival, along with the Trinity Irish Dancers. The Red Hot Chilli Pipers join the headline list on Sunday.

With Billboard’s No. 1 World Album, “The Boathouse,” Gaelic Storm blends indie folk and world grooves with Celtic tradition for an acoustic production that brings fans to their feet 200 days a year. The group’s ability to incorporate a rock sensibility into their sound affords them rare crossover appeal. “The Boathouse” is the their fourth album to debut at No. 1 on Billboard’s World Album chart. Gaelic Storm will perform at 9:30 p.m. Friday, 10 p.m. Saturday and 12:45 p.m. Sunday on the Park Avenue stage in Lincoln Park.

The Red Hot Chilli Pipers are another returning fan favorite, with their signature bagpipes-with-attitude show that will rock the Park Avenue stage Sunday at 3 p.m. The most famous bagpipe band on the planet hails from Scotland and has spent the past decade touring the world and winning awards with their groundbreaking fusion of traditional Scottish music and rock/pop anthems, which they proudly call “Bagrock.”

Trinity Irish Dancers, a touring troupe of young dancers based in Chicago and Milwaukee, has been winning championships and impressing crowds with traditional Irish dance for 30 years. With a loyal local following, the Trinity Irish Dancers have been part of Iowa Irish Fest since its inception in 2007. They will perform at 4:30 p.m. Friday, 1 and 5 p.m. Saturday, and 11:30 a.m. Sunday on the Park Avenue stage. They will also host two dance clinics.

The Cultural Events Center Stage will feature traditional Irish performances in dance, music, storytelling, theater and more. There will even be an Irish stew and soda bread cook-off. (See the attached complete entertainment schedule.)

About Iowa Irish Festival
Admission is just $15 for all three days, and children 12 and under are free. For more information or to volunteer, visit IowaIrishFest.com.