Thinc Design, Lead Exhibition Designer* for the National September 11 Memorial Museum: Firm Develops the Exhibits for One of the Most Important New Museums in America

Thinc Design is the lead exhibition designer* of the National September 11 Memorial Museum, opening to the public on May 21, 2014. Under the leadership of Tom Hennes, Principal of Thinc, the exhibition provides a broad range of information and narratives, allowing visitors to gain new perspectives on their and others' experience with the events of 9/11 and to engage with the complex world that is their result. 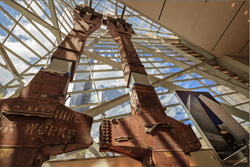 The stories and objects we’ve encountered in designing the exhibits connect us to a breadth of experience that touches something deeply human in ourselves.

In 2007, Tom Hennes, principal of Thinc Design, walked into Hangar 17 at New York City’s JFK Airport, the 80,000-sq.-ft. building that had become the repository of more than 1,500 artifacts from the collapse of the World Trade Center towers.

As lead designer of the National September 11 Memorial Museum, Hennes’ charge on that day was to familiarize himself with key objects from the rows of haunting, powerful and poignant artifacts located in the hangar. Those he worked with—several enormous sections of structural and twisted steel, eloquent in their own silent narratives—have become integral to the massive 110,000-sq.-ft. museum. “It was clear that the central design challenge,” recalled Hennes, “was not, as it is in so many museums, to bring the material to life.” He continued: “The material of 9/11 was so powerful that we realized we needed to find ways to make it bearable for people in the museum to witness it.”

The complexities inherent in designing exhibitions for this museum required an effort that included the counsel of a clinical psychologist with an expertise in loss and mourning, a partnership with Local Projects, a media firm that would work with the massive quantity of digital documentation of the events, and the many constituents whose participation in the formation of the museum would play a key role, including family members, survivors, neighborhood residents, and government officials.

Thinc developed a strong theoretical and aesthetic basis for working with these complexities: the design would be emotionally, physically, and intellectually straightforward, coherent, and simple to navigate. The exhibition would not only honor the history of what happened, it would also provide the means for people to relate more deeply and personally to 9/11 while gaining greater empathy for others’ experience and views. To accomplish this, the content in the museum would be spare; the exhibits would be restrained and designed without embellishment or editorializing. The exhibits would interact with the architecture and create a strong sense of place for visitors, anchoring them in the “here and now” of a museum on the site of the collapse of the World Trade Center, and the design would reflect the intricacies of the many narratives of 9/11, reflecting the fact that there is no simple way of understanding the events or their aftermath.

Hennes said, “The stories and objects we’ve encountered in designing the exhibits connect us to a breadth of experience that touches something deeply human in ourselves.” He added, “After nearly 8 years of planning, the opening of the museum finally makes this material available to everyone, in a place to reflect on this history and thoughtfully engage with the world that is its result.”

The Visitor Experience
Visitors descend from the memorial plaza to the concourse level, where they are walked through a “processional” sequence: from “where I was then“—recollections of having heard about the attacks for the first time—to a first-hand witnessing of the site of one of the attacks, to encounters with the buildings and urban space that was once here, to the loss of life during the attacks and their aftermath. The enormity of the space at bedrock physically creates a palpable sense of ineffable absence, and loss, while at the same time asserting a promise of remembrance, as reflected in a quote from Virgil: “No day shall erase you from the memory of time.”

From there, people can enter the memorial exhibition, an enclosed space that evokes the presence of those who died in contrast to the sense of absence elicited by the open and vast space of Memorial Hall. This area acknowledges “The Many” who were lost, manifested in photographs of the victims that line its outer perimeter, changing displays of personal effects donated by families, and touch tables that offer more detail about each of them. “The One” is manifested in the inner core, a communal gathering space in which short media pieces play, having been created from material donated by families play in sequence.

In the open spaces at bedrock, walkways guide people around and through the archaeological remains of the site. The largest artifacts, embedded in or reinstalled in the site, are “silent witnesses” to the enormity of the event and the enormous scale of destruction. These provide an elegiac sense of loss, as well as an affirmation of memory. Also embedded in these exhibits are elements that draw out the many experiences of the events—from first responders to society’s coming to terms with the aftermath—and the way in which each of us have come to terms with this event. These echoes of “what once was here” are reinforced through the in situ archaeological remnants of the Trade Towers.

Finally, a portion of the Slurry Wall remains in Foundation Hall, accessible, a symbolic survivor of the day’s events. Standing in front of it, the “Last Column,” covered with graffiti-like messages from rescue and recovery workers, testifies to the way this community responded during the recovery effort. The experience is direct and unmediated; this and the other open areas allow visitors to contemplate and process the experience of 9/11 in their own terms as an event and as a shaper of present day world and society. People can also leave a record of their impressions at interactive stations placed near a huge piece of bent steel that lies in repose. Their writings, projected onto the Slurry Wall, reinforce our becoming part of the community of witness to this event.

Thinc is at the forefront of design for public spaces that combine visitor engagement, multifaceted storytelling, diverse communities and evolving narratives utilizing artifacts, digital media, broad visitor participation and the Internet. The National September 11 Memorial Museum incorporates all of these attributes. The firm’s work focuses on the developing intersection of society and exhibition making in North America, Asia, the Middle East, Europe, and South Africa.