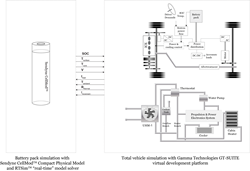 Gamma Technologies GT-SUITE is a leading tool for total vehicle simulation. Selected by Robert Bosch GmbH as its preferred tool, Gamma was recently presented with a Supplier Innovation Award for Transmission and Driveline Engineering by Chrysler at its 2014 Innovation Awards ceremony. Sendyne, whose technology was nominated for a 2014 EE Times and EDN ACE Award, provides its CellMod™ CPM and RTSim™ real time solver to enable interactive and detailed simulation of the battery pack to the rest of the vehicle systems.

Total vehicle simulation can reduce time to market, improve performance and cut costs by aiding in the optimization of the power delivery system. In order to ensure high accuracy of complete hybrid powertrain simulations, it is important that models capture the temperature-sensitive behavior of the involved components and the flow of energy between subsystems. By coupling a battery CPM with a hybrid electric vehicle model that includes the propulsion system and the thermal aspect of its components, as well as the entire cooling system, GT-SUITE becomes the first simulator tool to accurately predict the interactions between various subsystems and numerous energy paths. Thus it can be used to reduce battery pack overdesign, as well as for thermal management analysis and control strategy optimization.

Typically, battery simulation for hybrid and electric vehicles is performed through the use of look-up tables and uncoupled equivalent-circuit and thermal models, neither of which can provide a reliable level of accuracy. Sendyne’s CellMod, while compact, is nonetheless based on physics as well as measured data. It provides macroscopic behavior modeling of all revenant observable phenomena, including their derivatives and interdependencies, and thus provides good predictability and overall accuracy.

“Reducing costs and improving the performance of power delivery systems is of critical importance to electric vehicle developers,” said Mike Arnett, Senior Engineer and Application Leader for HEVs at Gamma Technologies. “We look forward to working with Gamma to introduce this important technology to the market,” added Ellen Gooch, Sendyne’s Director of Marketing.

The new technology will be presented at the IEEE Transportation and Electrification Conference iTEC2014 on June 15 to 18, 2014.

About Sendyne
Sendyne develops key semiconductor components and advanced circuits for the management of battery systems used for grid storage and EVs, as well as innovative tools for battery system design and optimization.