Fixing long-standing issues critical to delivering value for taxpayers, according to National Council of Nonprofits. 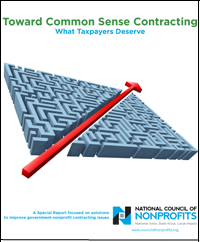 The new data demonstrate what most nonprofits already know; the systems are broken. We’ve been encouraged by the progress in some states with implementing the solutions outlined in the report and encourage other states not to be left behind.

Significant shortcomings in government-nonprofit contracting practices persist, but common sense solutions to the problems are ready for implementation, according to new reports released today by the Urban Institute and the National Council of Nonprofits (Council of Nonprofits).

The Council of Nonprofits today released Toward Common Sense Contracting: What Taxpayers Deserve, a report that examines the causes and consequences of five recurring problem areas that involve billions of dollars. The report connects new data from the Urban Institute with the experiences of front-line nonprofits that are delivering services on behalf of governments at all levels. The report goes on to lay out sixteen proven and often readily available solutions to these problems.

The Urban Institute also released today its state-specific data from a national survey documenting the serious and widespread problems experienced by nonprofit organizations that have contracts and grants with governments at the local, state, and federal levels. The report, National Study of Nonprofit-Government Contracts and Grants 2013: State Profiles, provides essential nationwide and state data on contracting practices, and ranks states on several areas of concern.

Together, the reports shed light on widespread issues and identify ways for nonprofits and governments to work together to chart a new path forward.

“American taxpayers deserve better. These costly problems with government contracts and grants have persisted for too long. They are harming our communities, diverting already limited resources away from nonprofit missions, and wasting taxpayers’ money," said Tim Delaney, President and CEO of the National Council of Nonprofits. “Importantly, this is not a situation pitting nonprofit leaders and employees against government officials and employees. Governments and nonprofits are natural partners, serving the same communities and the same constituents. On this issue, the common enemy is the antiquated and fragmented government-nonprofit contracting systems that hurt everyone.”

“The new data demonstrate what most nonprofits already know; the systems are broken,” said Beth Bowsky, Policy Specialist – Government-Nonprofit Contracting for the National Council of Nonprofits. “We’ve been encouraged by the progress in some states with implementing the solutions outlined in the report and encourage other states not to be left behind.”

“This report is not designed to sit on the shelf, but to be used as an action plan for solving the contracting problems for the benefit of individuals in need of services, taxpayers, and entire communities,” said David L. Thompson, Vice President of Public Policy for the National Council of Nonprofits. “We extend an open invitation to all interested people – officials within government, frontline nonprofit employees and volunteers, individuals relying on services, taxpayers, and politicians – to help identify the problems that need solving immediately, craft the appropriate solutions, and take action to get them implemented.”

The National Council of Nonprofits is a trusted resource and advocate for America’s charitable nonprofits. Through our powerful network of State Associations and 25,000-plus members – the nation’s largest network of nonprofits – we serve as a central coordinator and mobilizer to help nonprofits achieve greater collective impact in local communities across the country. We identify emerging trends, share proven practices, and promote solutions that benefit charitable nonprofits and the communities they serve. Learn more at http://www.CouncilofNonprofits.org.