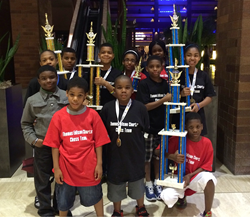 Thomas Edison Charter School, where over 95% of the students live at, or below the poverty level, competed and won a National Title at the United States Chess Federation (USCF) National Elementary Chess Championship in Dallas, Texas on Sunday, May 11, 2014. The students from Thomas Edison competed against over 35 teams and 230 students from May 9th – May 11th in the K-6 Under 1000 section and tied for 1st place with a Montessori magnet school from Minneapolis, MN. The entire national chess tournament included more than 2,200 students from 37 different states, with over 600 teams competing in 12 sections. Edison was the only school from Delaware competing in the National Tournament, but persevered to bring home Delaware’s first National Scholastic Chess Championship. A total of 25 Edison students, in three different sections, traveled to Dallas for this tournament and to Atlanta, Georgia in April for the Junior High National Chess Championship.

This winning team is led by Principal Salome Thomas-EL, award-winning educator and author of two best-selling books, “I Choose To Stay” and “The Immortality of Influence.” Principal EL is capturing the attention of many by committing to building the emotional resilience and intellectual well-being of children everywhere. Principal EL has been featured on C-SPAN, CNN, NPR, Oprah Radio and The Dr. Oz Show.

Thomas Edison Charter School is "Educating and Elevating Every Student, Every Day, to attend the best high schools and colleges. No Excuses!"