The Dogecoin community is on its way to making "To the Moon" a reality. Team Phoenicia, Inc. and RevUp Render, Inc. have joined forces to roll out the next big Dogecoin challenge—the RevUp Render Lunar Iditarod Competition—where teams compete to have their mini rovers physically delivered and raced on the moon. 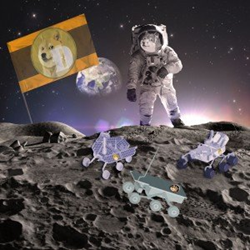 The Iditarod is the perfect way for the Dogecoin community to push the limits of digital currency and advanced engineering to achieve something that has never been done before.

"To the Moon!”—a familiar slogan that resonates in the Dogecoin community—is on its way to becoming a real-life event. Team Phoenicia, Inc. and RevUp Render, Inc. have joined forces to roll out the next big Dogecoin challenge—the RevUp Render Lunar Iditarod Competition. Fueled by Dogecoin digital currency, which is similar to Bitcoin, participants will compete in a three-way race on the moon, racing mini moon rovers (DogeSleds) the size of smart phones. Details about the event can be found on the Iditarod competition website at lunariditarod.revuprender.com.

The RevUp Render Lunar Iditarod will unfold in several stages over the next year and a half. The first stages of the competition will narrow the field of competitors to three Dogecoin-themed DogeSled moon rovers. For the final stage of the competition, the three chosen DogeSleds will be placed aboard a lunar lander and physically carried to the moon on Team Phoenicia’s Phoenicia-1 mission scheduled for Q4 2015. The final stage of the competition involves the actual race, which will take place on the moon after the three DogeSleds have disembarked from the lunar lander.

The Dogecoin-themed event is the culmination of space meets the cloud—Team Phoenicia’s discovery of an unmet need in the private space industry and RevUp Render’s custom cloud technology for design and engineering, which allows teams to collaborate on complex design projects from any location. Team Phoenicia, which is manifesting the Phoenicia-1 mission, will deliver payloads to low-earth orbit and the moon. In November 2013, Pennsylvania State University’s Google Lunar X PRIZE team, the Lunar Lions, was the first payload to reserve a slot on the Phoenicia-1 launch in 2015.

“Team Phoenicia was a Google Lunar X PRIZE (GLXP) team for several years before withdrawing to focus on the launch,” said William Baird, CEO, Team Phoenicia. “We realized the launch itself was as challenging as the rest of the prize. If someone did not focus exclusively on the launch, no team was likely to make it to the moon.”

“The Iditarod is the perfect way for the Dogecoin community to push the limits of digital currency and advanced engineering to achieve something that has never been done before—racing micro-rovers on the moon,” explains Ry Bruscoe, president of RevUp Render. “Participants will have access to our advanced cloud computing technologies to push their designs to new heights. We can’t wait to see what the Lunar Iditarod teams create in the most ambitious challenge to date for the Dogecoin community.”

“Team Phoenicia is proud to support the RevUp Render Iditarod Challenge. We bring our experiences in past challenges, the contacts made through those experiences, and of course, the launch itself,” explained Baird. “The Dogecoin community is well positioned for growth beyond being just another cryptocurrency. By cross pollinating the Dogecoin, robotics, and NewSpace communities, we create an opportunity for these vastly different communities to learn from one another, creating something that is stronger and better than we ever imagined. Not only are we offering to help the Dogecoin community achieve its goal of ‘To the Moon,’ we are helping to create a market for Dogecoin that will help increase demand for the cryptocurrency around the world.”

Within a period of five months, Dogecoiners funded the Jamaican Olympic bobsled team, sponsored a NASCAR driver, and rallied behind numerous charities. Unlike these previous sponsorships, The RevUp Render Lunar Iditarod, is not reliant on crowdfunding. At its core, this event is about extending Dogecoin awareness and usage by incorporating Dogecoin marketing and transactions into the competition requirements. The Lunar Iditarod is the ultimate vehicle for getting Dogecoin “To the Moon!”