The newly minted Pace School of Performing Arts (PPA) began as the university’s flourishing Performing Arts department, which over the last three years has experienced unprecedented growth in applications and enrollment. 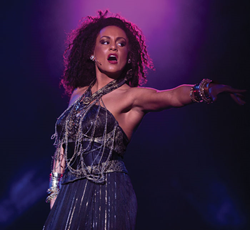 As a recognized School of Performing Arts in New York, we become an even a more attractive destination for young artists seeking a career on stage and media.

“The Board of Trustees’ approval of Pace’s long-established undergraduate performing arts program as a school within the Dyson College of Arts and Sciences is emblematic of Pace's leadership in the performing arts by providing innovative programs for today's most talented students,” says Pace University President Stephen J. Friedman. “Pace is fast becoming a cultural hub for the performing arts in Lower Manhattan with its expanding performing arts offerings and facilities along with superb programming at the Michael Schimmel Center for the Arts.”

With the motto of “re-imagining training for the 21st century,” a Pace Performing Arts education straddles the fine balance between meeting the demands of today’s rapidly evolving entertainment industry and long-established, traditional instruction.

In the last two years, Pace has established eight new or redesigned degree programs that address gaps in the performing arts educational environment. In September 2014, Pace School of Performing Arts will introduce three new progressive performing arts majors geared specifically to today’s job market. The degrees include a new Bachelor of Fine Arts (BFA) in Acting for Film, Television, Voice-overs and Commercials; a Bachelor of Fine Arts in Production and Design for Stage and Film; and a Bachelor of Arts (BA) in Stage Management. The BFA in Acting for Film, Television, Voice-overs, and Commercials major is the first undergraduate program in the U.S. focused entirely on training the actor for work in front of the camera and microphone. Additionally, the Bachelor of Fine Arts in Commercial Dance is the only one of its kind in New York City offering comprehensive dance training that bridges the gap between classical dance technique and the professional world of commercial dance.

“We are very excited that Pace is making this major step in recognizing the growth in enrollment and prestige of Pace Performing Arts by establishing the School of Performing Arts in the Dyson College of Arts and Sciences,” comments Nira Herrmann, dean of Pace’s Dyson College. “Together with our new building at 140 William Street and our leading-edge performing arts programs, PPA is poised to deliver an exceptional educational experience to students, leading to professional training that is unparalleled and located in what is arguably the global capital for the performing arts, New York City.”

Prominent faculty at Pace School of Performing Arts include: Ion-Cosmin Chivu, Head of the International Performance Ensemble and one of the developers of PPA’s Masters Series, which provides students with opportunities to interact with well-established, outstanding professionals; Brian Hastert, Head of Pace’s newly approved BFA in Acting for Film, Television, Voice-overs and Commercials (FTVC) Program; Graham Kindred (a master lighting designer who has worked on Broadway, Lincoln Center and Off Broadway and has been teaching lighting to aspiring design students for more than 20 years), Head of the new BFA in Production and Design for Stage and Screen Program; Grant Kretchik, Head of the newly re-written BFA in Acting Program; Rhonda Miller, head of the new BFA in Commercial Dance Program; Amy Rogers, Head of PPA’s highly sought out BFA in Musical Theater Program; and former Chair and Associate Professor Ruis Woertendyke, who has been involved in theater for nearly 50 years as a director, playwright, and actor.

About Pace School of Performing Arts

About Dyson College of Arts and Sciences

Since 1906, Pace University has educated thinking professionals by providing high quality education for the professions on a firm base of liberal learning amid the advantages of the New York metropolitan area. A private university, Pace has campuses in New York City and Westchester County, New York, enrolling nearly 13,000 students in bachelor’s, master’s, and doctoral programs in its Dyson College of Arts and Sciences, Lubin School of Business, College of Health Professions, School of Education, School of Law, and Seidenberg School of Computer Science and Information Systems. Visit http://www.pace.edu.