Turner Construction Company partnered with the DC Small Business Development Center and Howard University to provide an eight-week intensive course teaching emerging contractors how to successfully propose to and work with large general contractors. Of the 200 students enrolled this year, 120 graduated in the largest Mid-Atlantic class to date. 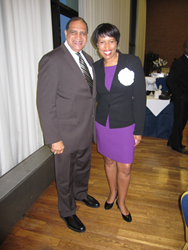 I want to run this city, and we need to get ready for a big future. That's why I'm happy to see you all here...DC small businesses hire DC residents, perpetuating a cycle of a stronger, more prosperous District across all 8 wards.

The 2014 Turner School of Construction Management (TSCM) Graduation Ceremony with Keynote Speaker Ward 8 Councilmember Muriel Bowser was held on Wednesday, May 14, at 6 p.m., at the Blackburn University Center Ballroom at Howard University. Turner Construction Company partnered with the DC Small Business Development Center and Howard University to provide an eight-week intensive course teaching emerging contractors how to successfully propose to and work with large general contractors. Of the 200 students enrolled this year, 120 graduated in the largest Mid-Atlantic class to date.

The program was presented by Turner staff and select industry partners who have spent years in the field and are regarded as subject-matter experts. This year’s topics included project management, accounting & banking, estimating and procurement, safety and sales & marketing. Since its inception, the program has helped attendees build networks, form long-term business relationships, and establish successful joint ventures to win contracts with Turner and other industry leaders.

Ken Jones, Vice President and General Manager of Turner Mid-Atlantic Region, opened the ceremony by asking for a show of hands, “How many of you were in business in 2007 and are still in business?” Quite a few hands were raised and Jones continued, “I don't care if you're a billion dollar company or a hundred thousand dollar company, you've made it if you've championed through the 2008 economic downturn.”

Class speaker Deanne Howard, whose company Howard Painting & Drywall is now positioned to work with Turner on an upcoming project, recounted the recurring messages to contractors within the TSCM program:

Relationships – Construction is a long-term business and relationships matter.
Experts – Focus on a specialty. Don't be a Jack or Jane of all trades.
Safety – Educate, engineer, and enforce safety protocols with your workforce.
Profitability – Walk away from a job if it's not a good fit for our company.

Featured speaker, Hilton Smith, Senior Vice President of Community Affairs for Turner Construction Company, drilled down on that last point announcing, “If you can’t do something, be honest and say that you can’t do it. But then learn how to do it.”

Finally, Councilmember Muriel Bowser took the podium addressing our city’s growth. She stated a projected 800,000 DC residents in 2040, up from today’s approximate 647,000. She is pleased to support Turner’s program because, “I want to run this city, and we need to get ready for a big future. That's why I'm happy to see you all here. We want DC residents working. We want to create great small businesses, so we have wealth right here. DC small businesses hire DC residents, perpetuating a cycle of a stronger, more prosperous District across all 8 wards.”

Turner has awarded more than $1 billion in contracts each year to minority- and women-owned business enterprises (MWBEs) for the past nine years. Many graduates of the Turner School of Construction Management become the beneficiaries as their participation in the program greatly increases their eligibility to perform work on Turner projects and joint-ventures.

About Turner Construction Company
Turner is a North America-based, international construction services company. Founded in 1902, Turner first made its mark on the industry pioneering the use of steel-reinforced concrete for general building, which enabled the company to deliver safer, stronger, and more efficient buildings to clients. The company continues to embrace emerging technologies and offers an increasingly diverse set of services. With an annual construction volume of $9 billion, Turner is the largest builder in the United States, ranking first in the major market segments of the building construction field, including healthcare, education, sports, commercial, and green building. The firm is a subsidiary of HOCHTIEF, a publicly traded company, and one of the world’s leading international construction service providers. For more information, please visit http://www.turnerconstruction.com.

About HOCHTIEF
HOCHTIEF is one of the most international construction groups worldwide. The company delivers complex infrastructure projects, in some cases on the basis of concession models. The Group operates in the transportation infrastructure, energy infrastructure and social/urban infrastructure segments as well as in the contract mining business. With nearly 81,000 employees and a sales volume of more than EUR 25 billion in FY 2013, HOCHTIEF is represented in all the world’s major markets. With its subsidiary Leighton, the Group is market leader in Australia. In the USA, the biggest construction market in the world, HOCHTIEF is the No. 1 general builder via its subsidiary Turner and, with Group company Flatiron, ranks among the most important players in the field of transportation infrastructure construction. Because of its engagement for sustainability, HOCHTIEF has been listed in the Dow Jones Sustainability Indexes since 2006. Further information is available at http://www.hochtief.com/press.