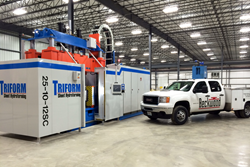 "Triform Sheet Hydroforming press users can react quickly to production needs, at a fraction of the cost when compared to those reliant on matched die sets.” - Jeff Debus, Beckwood President

Beckwood Press Company, a leading manufacturer of custom hydraulic presses and the Triform line of sheet hydroforming presses, recently built and installed a new Triform deep draw sheet hydroforming press for an automotive parts manufacturer specializing in rapid prototyping. The 25-10-12SC Triform features a 25” diameter forming area, 10,000 PSI of forming pressure and a 12” draw depth capacity. This is the second deep draw Triform for this company’s operation, with their having previously installed a Triform 16-10-7BD.

The auto parts manufacturer supplies a variety of automotive, off-road and tractor OEM’s and suppliers with parts, including exhaust parts, heat shields and other miscellaneous low-volume and prototype items. As their business is based on fast turnaround times, they have always prided themselves on using the latest manufacturing technologies. Due to the time and budgetary limitations of the matched die sets required within traditional presses, they began searching for alternatives. Which is when they discovered Triform Sheet Hydroforming Presses. The flexible diaphragm of the Triform press acts as a ‘universal female,’ eliminating the need for expensive matched tools. This fundamental shift in tooling requirements results in a lower per part cost and faster turnaround times.

In addition to the dramatically reduced tooling cost and lead time, the hydroforming process offers another distinct advantage over traditional hydraulic or mechanical press forming. Before hydroforming, this supplier had parts that were formed with hard tooling as 3-4 individual pieces then welded together into the final part. With the new hydroforming equipment, those same complex assemblies can now be consolidated into a one-piece part which requires a single cycle of the hydroforming press, completely eliminating the secondary welding operation.

“We are proud to announce another adoption of Triform’s large deep draw technology,” said Beckwood President, Jeffrey Debus. “This was the second of three large deep draw installations in two months for Beckwood. The advantages offered by our Triform technology, including inexpensive tooling, reduced reliance on skilled labor, and our 'In-Sight' feature for prototyping are becoming apparent to manufacturers in a variety of industries including aerospace and automotive,” he continued. “Triform users can react quickly to their production needs, at a fraction of the cost when compared to those reliant on matched die sets.”