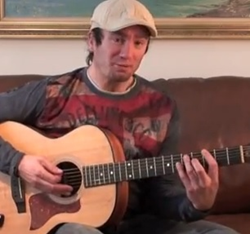 In the blues a lot of times you will have Diminished chords.

The Diminished scale, or Octatonic scale, is a musical scale in which the notes ascend in alternating intervals of whole and half steps. In jazz this is often referred to as the whole-half scale. This scale is also often used in the Neo Classical genre.

Jacques Darville
Jacques Darville is Danish born American who specializes in both acoustic and electric blues. Jacques has taught guitar and music for over 16 years. He is a graduate of Oakland University in Detroit Michigan where he earned his B.A. in music/performing arts. Jacques currently resides in Copenhagen Denmark where he teaches guitar to students of all ages, and actively plays with his band, Darville Duo. In addition to having a great deal of recording experience, Jacques has also toured in the USA, Denmark, Holland, Austria and the Philippines, both as a solo artist and with different bands.

About BluesGuitar.com
BluesGuitar.com is the leader in modern blues guitar instruction. It’s packed with resources including articles, video lessons, and the best videos in the business for the beginner to the advanced guitar student taught by the best instructors out there.