To counter this lack of awareness, Power Story Ent., Inc. has just released the documentary film “Making Light in Terezin” on Amazon.com. 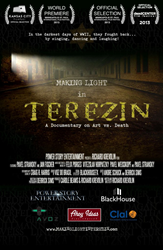 A newly released international survey conducted by the Anti-Defamation League (http://global100.adl.org) shows that only 54 percent of 53,100 adults polled in 102 countries and territories have ever heard of this horrific historic event.

Despite the mass murder of millions during the Holocaust, and the postwar pleas of “Never Forget” and “Never Again,” a newly released international survey conducted by the Anti-Defamation League (http://global100.adl.org) shows that only 54 percent of 53,100 adults polled in 102 countries and territories have ever heard of this horrific historic event. Two out of three people surveyed either never heard of the Holocaust or do not believe historical accounts to be accurate.

To counter this lack of awareness, “Making Light in Terezin” has just been released on DVD by Power Story Ent. and Writer/Director/Producer, Richard Krevolin.

This true story shows how Jewish prisoners in the Terezin Ghetto managed to survive during WWII with the help of song, dance, theater, and comedy. In light of this new poll, he is also booking interviews and presentations to share the film and its companion book of the same name (available in print and e-reader formats through Amazon.com, etc.) He can be contacted at rkrevolin(at)yahoo(dot)com.

According to Krevolin, one of the most inspiring moments in “Making Light in Terezin” occurred during his interview with Holocaust survivor Pavel Stránský, age 93. Stránský was kept in Terezin from December 1941 through 1943 and was also imprisoned at Auschwitz, where he watched Josef Mengele (an officer and physician infamous for selecting who would be killed) seat young children on his knee and tell them “call me Uncle” right before sending them to their deaths.

Despite witnessing such evil firsthand, Stránský never became bitter; instead, he speaks in the film of forgiveness and love and how the arts helped he and other prisoners to survive (for a sneak peek of Stránský’s interview, visit youtube.com/watch?v=ogguOPv5fqo).

“Making Light in Terezin” celebrates the creative artistic spirit that was alive in the prisoners of Terezin in 1943 despite the atrocities of war. Because of the length limitations that come with film, which meant only snippets of each interview could be included, the companion book offers supplemental details and historical facts. It presents the full survivor interviews and discussions with Holocaust scholars, “second generation” family members, and even a Ph.D. candidate speaking about the effects of imprisonment and creativity on brain chemistry.

The trailer for the film can be seen at: http://www.youtube.com/watch?v=sTJSYPKRhIQ.

The book and film can both be purchased on Amazon.com, and other video on demand sites.