Celtic jewelry company that launched a second store during Canal Days in 2009 will celebrate five years of growth during Fairport's largest festival, June 7 & 8, 2014. Stephen Walker sites community spirit, good weather for his opening and a guest appearance by one of Ireland's leading Celtic craftsmen for his shop's bright start. 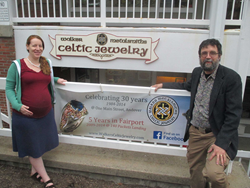 Our customers are very loyal. People who have been here are happy to come back. As more and more people discover our shop we have seen a steady increase in business each year

The “luck of the Irish” was with Stephen Walker when he moved his Rochester shop, Walker Metalsmiths Celtic Jewelry, to Fairport in 2009. The move from Park Avenue was timed so that the new location of the family run business would be introduced during Fairport’s largest festival, Canal Days. This year the festival falls on June 7 and 8. Walker’s shop at 140 Packets Landing will be open for extended hours during the festival, as well as exhibiting Walker’s unique, handcrafted Celtic rings and other jewelry with a street fair booth on Main Street.

A combination of good weather, enthusiastic support from the community and guest artist appearance by one of Ireland’s leading Celtic jewelers all contributed to a successful launch of the new shop. Picture perfect weather brought a record 250,000 visitors to Fairport for the juried arts festival, musical performances, food and entertainment on the legendary Erie Canal.

Festival promoters were very excited about Walker’s guest jewelry artist Aidan Breen. A native of Dublin, Breen is one of Ireland’s most famous Celtic design craftsmen. The festival publicist Scott Winner arranged for several television and radio interviews with this esteemed international exhibitor, which in turn brought hundreds of people into Walker’s shop. Walker says, “I cannot overstate how helpful Aidan was getting this shop established. Aidan Breen is a great master craftsman of the Celtic Renaissance. Having him with us was the best endorsement of our quality and authenticity I could ask for.”

Each of Walker’s six children has worked for the family business at some point, along with his wife Susan and mother Barbara. The Fairport shop was originally managed by Walker’s eldest daughter Jeanne, who took over leadership from her brother Andrew, who had established the Rochester shop in Park Avenue. The shop is a retail extension of their father’s workshop, showroom and mail-order business in Andover, NY. More than half of the sales are of silver and gold jewelry made in the Celtic tradition at the family workshop. Jewelry and other crafts from designers and craftsmen in Scotland and Ireland add the treasure trove on display.

The Fairport store has hosted several special exhibits. In 2012 the American Celtic Art Exhibition was shown during the month of March. This was a touring collection of paintings and sculptures made by American artists working in the Celtic tradition. In 2013 an exhibition of antique Celtic jewelry was presented that traced the development of the style in Scotland and Ireland from the 1840s through 20th century. This exhibition resulted in a book, written collaboratively by Aidan Breen and Stephen Walker and others titled The Modern History of Celtic Jewellery, which is available through Amazon.

For the past three years Walker’s Celtic jewelry in Fairport has been managed by Susana Galens, a former customer, who jumped at the opportunity to make her love of Celtic jewelry her career when she learned that Jeanne Walker was leaving in 2011. Susana is assisted by two Fairport High School graduates Lindsey Heavner and Kelsey Hatlestad, both of whom are pursuing training as jewelry artists. Susanna says, “Our customers are very loyal. People who have been here are happy to come back. As more and more people discover our shop we have seen a steady increase in business each year.”

Walker Metalsmiths was begun in Andover, NY by Stephen and Susan Walker in 1984. In their thirty years in business they have created silver and gold jewelry inspired by the medieval treasures of Ireland and Scotland. Many of their rings, Celtic crosses, necklaces and earrings can be purchased on-line at their website WalkersCelticJewelry.com. Over thirty-eight thousand fans follow their work on Facebook. Regular business hours at the Andover location are week days 9-5 and Saturdays 10-3. Phone 800-488-6347. The Fairport store is open year round Tuesday through Saturday 10 - 6. Normally closed Sunday and Monday, but for Canal Days the shop will be open on Sunday June 8. Fairport phone 585-223-7033.

Unique Celtic jewelry in sterling silver and 14K gold crafted by Walker Metalsmiths.Earrings and necklaces designed and made by Stephen Walker and his talented assistants.