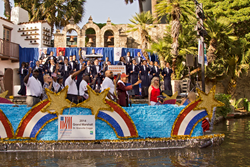 San Antonio is known as Military City, USA, and we want to honor our men and women in the armed forces.

The San Antonio River Walk was filled with an array of patriotic floats on Saturday evening, May 17 for the city's 3rd annual America's Armed Forces River Parade hosted by the Paseo del Rio Association.

More than 2 dozen decorated floats traveled down the historic River Walk, themed according to their participants including all branches of service, veterans of recent conflicts, military support groups and more. Tops in Blue, the Cruisers, and other military performing groups provided live music for the patriotic event.

"San Antonio is known as Military City, USA, so we want to honor our men and women in the armed services, as well as those who have served in conflicts throughout recent history," said Nancy Hunt, Executive Director of the Paseo del Rio Association.

Leading the parade was 88-year-old Grand Marshal Dr. Granville Coggs. Dr. Coggs entered the U.S. Army Air Corps during World War II and joined the legendary Tuskegee Airmen, the first group of African-American aviators in the United States Armed Forces. After the war, Dr. Coggs received degrees from the University of Nebraska and Harvard Medical School. He served as a Professor of Radiology at the University of Texas Health Science Center San Antonio and as Chief of Radiology at San Antonio's Audie Murphy VA Hospital.

The parade will be streamed around the world on the Pentagon Channel. The annual event is hosted by the Paseo del Rio Association, a non-profit organization founded in 1968 to promote, protect and preserve the San Antonio River Walk.