In the latest comic book from MGMbill.org, Foreskin Man confronts a gang of circumcisers doing business in a gritty Manila neighborhood. 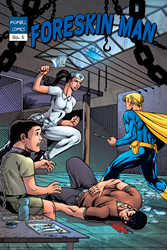 The world’s most controversial superhero has returned to battle male circumcision, and this time the enemy is in Southeast Asia. Foreskin Man’s latest adventure leads him to a hideout in the Philippines, where a group of bloodthirsty nurses are plotting a mass circumcision in an abandoned Manila slaughterhouse.

The tale begins when the Museum of Genital Integrity’s chief sculptress Malaya Luansing suddenly takes off to visit her family in the Philippines, putting her highly anticipated Filipino circumcision exhibit on indefinite hold. The trip was supposed to help Malaya clear her head, but Manila has become much more treacherous since her last visit. Will Foreskin Man be able to help if the situation spirals out of control?

“Foreskin Man #6: Operation Tuli” is written by Matthew Hess, who is president of MGMbill.org. The title of the story is based on the seasonal circumcision project of the same name that is cosponsored by the Philippines Department of Health and other government agencies. Three different artists were commissioned to draw, color, and letter the comic, which includes gruesome scenes depicting a fictitious male circumcision clinic in Manila.

“Operation Tuli is state sponsored assault against children,” said Hess. “It’s an annual tradition where boys as young as five years old are forcefully taken by their parents to government funded facilities to have their genitals mutilated en masse. Promoters of this practice claim that tuli turns boys into men, but in reality, all it does is steal their innocence and leave them disfigured for life.”

The internet is rife with explicit photographs and videos documenting the horror of male circumcision in the Philippines. A typical image involves young boys screaming in pain as smiling nurses cut off their foreskins.

“If it were girls being carved up on those tables instead of boys, governments would be working together to stop Operation Tuli,” said Hess. “Male circumcision removes thousands of specialized nerve endings and it is just as damaging and painful as most types of female circumcision. Operation Tuli and other genital cutting programs in the Philippines should be shut down.”

For now, though, it appears that Foreskin Man is the only hope for boys who want to be saved from the Filipino circumcisers. Foreskin Man #6 is available to read and download for free at http://www.foreskinman.com. Printed copies may also be purchased online or ordered through a local comic book store.