New Book, ‘Stains on the Gavel,’ Is 2nd in a Nightmarish Criminal Justice Tale 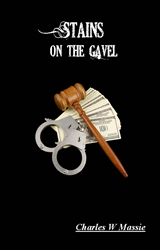 Stains on the Gavel by Charles W. Massie

Charles W. Massie has released book two of his “BlueGrass series,” “Stains on the Gavel.” This novel continues the ordeal some have dubbed as Kentucky Injustice.

It all began in book one, “Pinned,” when New Yorker Mark Casey meets an amazing woman, Roxie, from Kentucky through an internet dating site. She’s the woman of Casey’s dreams: sensual, ambitious, funny and beautiful. It’s not long before Roxie has Casey wrapped around her finger. Ultimately, however, Roxie is manipulating Casey in an elaborate ruse of her own design, that results in him going to jail on false charges and her in possession of everything he owns.

“Stains on the Gavel” continues the story of Kentucky Injustice. Having been arrested for crimes he did not commit, Casey must now do battle with the officials of rural southern Kentucky, who are apt to play by their own rules when it suits them.

“The BlueGrass series, or Kentucky Injustice, may seem like it was written by someone who has an irrational bias against the Bluegrass State”, Massie says, “but I’ve simply written a true account of a real-life story – everything in these books really it happened to me.”

Massie goes on to say, “Of course, I’ve met many good Kentuckians who knew that the drug charges against me were the result of a setup, but that didn’t change what I had to endure in the state’s obtuse legal system.”

Amazon reviewer Dii gives the book five stars and says, “… A dark, gritty, down and dirty crime has been committed and justice has been railroaded in the name of revenge in a Good Ole Boy network of ‘trusted’ public law enforcement authorities.

“Unfortunately, a man in his sixties is the victim of this injustice, dealing with prison time for crimes he did not commit and is stonewalled at every attempt to prove his innocence or even get a fair day in court. ‘Stains on the Gavel’ by Charles W. Massie had my skin crawling in frustration at times — NOT because this isn't a great read, but BECAUSE it is so powerfully written.”

Charles Massie is an engineer, former member of the U.S. Navy and businessman, overseeing several companies including Massie Engineering Associates and InfoTech Consulting. He’s also a prolific writer and owner of Starshow Publications. “Stains on the Gavel,” http://www.starshowpublications.com, continues the story of his online dating and criminal justice nightmare, which begins in his first novel, “Pinned: A Kentucky True Crime.”