Returning to Cain Park for its 12th annual summer series on June 12-14, the innovative and award-winning GroundWorks DanceTheater will premiere a new work by Artistic Director David Shimotakahara and reprise two audience favorites from its extensive repertory -- "All I Do" by David Parker and "Hindsight" by Lynne Taylor-Corbett to the music of Chrissie Hynde. 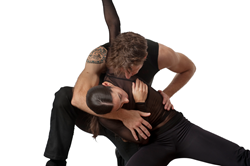 Marked by an amazing cohesion of style, spirit and attention to detail. - Arts in Ohio

Returning to Cain Park’s Alma Theater for its twelfth annual summer series June 12-14, the innovative and award-winning GroundWorks DanceTheater will premiere a new work by Artistic Director David Shimotakahara and reprise two audience favorites from its extensive repertory, "All I Do" by David Parker and "Hindsight" by Lynne Taylor-Corbett.

All I Do (2010) by David Parker, a “whimsical and intricate invention” (The Plain Dealer), is set to music from the American film classic "Singin' in the Rain" (including the eponymous “All I Do is Dream of You”). The New York-based Parker, choreographer of The Bang Group, was praised by The Dance Insider for “turning musical theater, dance and rhythm topsy-turvy, offering fresh, witty observations to his audiences as he does so.” A 2013 Guggenheim fellow in choreography, he has been commissioned by over 35 dance companies, universities and festivals, including The Anna Sokolow Players Project, Dance Alloy Theater in Pittsburgh, Arena di Verona Ballet Company (Italy), and Juilliard New Dances.

The Cain Park program’s World Premiere, a duet by GroundWorks Artistic Director David Shimotakahara, will feature live accompaniment on marimba by musician Luke Rinderknecht. A graduate of Shaker Heights High School, Rinderknecht is a Juilliard trained percussionist who has appeared on stages around the world, including Tokyo's Suntory Hall, Vienna's Musikverein, and at The Proms in London's Royal Albert Hall. He has performed with The Metropolitan Opera, The Qatar and Buffalo Philharmonics, St. Luke's Chamber Orchestra, and the Virginia and West Virginia Symphonies. Rinderknecht is the husband of GroundWorks dancer Annika Sheaff.

Now in its fifteenth season, GroundWorks is dedicated to the development and presentation of new choreography and collaborations. The five-member company performs new works by Shimotakahara and Artistic Associate Amy Miller, as well as commissioned work by nationally and internationally acclaimed choreographers including Ronen Koresh, Dianne McIntyre, Lynne Taylor-Corbett, Jill Sigman, Gina Gibney, David Parker and others.

Cain Park, a municipally owned and operated summer arts park and one of the nation’s oldest landmark outdoor theatres entering its 76th season, is produced by the City of Cleveland Heights and is located on Superior Road between Lee and South Taylor roads.