Quadriennale 2014 is already a success with over 100,000 art enthusiasts attending Düsseldorf’s city-wide every-four-years arts festival during its first six weeks. With the weather getting warmer, art events will spill over to many outdoor sites and venues as Quadriennale shifts into summer mode until August 10. 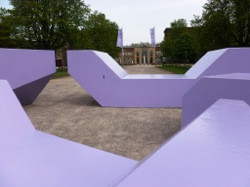 This year’s theme 'Beyond Tomorrow' explores how artists see the future.

It’s only been the first six weeks, but the 13 major art venues participating in Quadriennale Düsseldorf 2014 – the major fine arts festival that takes the art capital Düsseldorf up a few notches every four years – have already hosted over 100,000 visitors from all over the world. Things will only get more intense as the weather gets warmer and the festival expands beyond the indoor exhibits. Soon, events will also happen outdoors all over the city, when the festival’s “summer mode” begins with a video night on May 31. Called "ARENA – a video course for Düsseldorf's Old Town," video art will be shown in 19 bars, pubs and restaurants between the Rhine River Promenade and the city square called “Grabbeplatz.”

This year’s Quadriennale Düsseldorf theme “Beyond Tomorrow” explores how artists see the future. Other highlights , include:

Kunstsammlung K20 Grabbeplatz, which houses the collection of the State of North Rhine-Westphalia, is showing “Kandinsky, Malevich, Mondrian – The Infinite White Abyss” (Kandinsky, Malewitsch, Mondrian – Der weiße Abgrund Unendlichkeit), an exploration of white parts in the works of the three artists till July 6.

Utopic and anti-utopic aspects of life below ground are the focus of an exhibit at Kunstsammlung K21Ständehaus, titled “Beneath the Ground: From Kafka to Kippenberger” (Unter der Erde: Von Kafka bis Kippenberger).

“Smart New World” is the name of the exhibit at Kunsthalle Düsseldorf, which examines “data capitalism” and its effects on everyday life, such as permanent surveillance and the shifting of lives from private to public.

The city’s tourism office is offering hotel and city specials for Quadriennale Düsseldorf 2014. The travel package called “Quadriennale 2014” can be booked right from the tourism office’s website at http://www.duesseldorf-tourismus.de/en/accommodation/hotel-packages/hotel-package-quadriennale-2014/. Prices start at €89 per night per person based on double-occupancy for a 3-star hotel in the city center and at €119 per person for a 4-5 star hotel. All packages include breakfast, a Düsseldorf Welcome Card (free public transportation within city limits, 1 ticket to Quadriennale Düsseldorf 2014, plus more than 40 free or reduced admissions to city attractions), a city information package, and a MERIAN city guide.