With the upcoming digital release of their award winning, independent film ‘Speak Now’, film producers offer movie lovers a chance to pre-order their film and win an iTunes gift card. 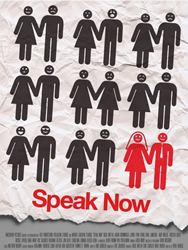 The producers of ‘Speak Now’ ask that contestants and supporters share the film with their network and download it on iTunes on June 1st so that they can try to crack the iTunes indie Top 10 charts.

Award winning, independent film ‘Speak Now’ is now available for digital pre-purchase on iTunes and download on June 1st. Leading up to their big release, they are holding a contest for a chance to win a $50 iTunes Gift Card. To enter, movie lovers are asked to visit their iTunes page and pre-purchase either the SD ($5.99) or HD ($7.99) version of the film. They then, will need to forward a copy of their iTunes receipt to speaknowcontest@gmail.com with their name in the subject line. Contestants can gain an additional entry by referring friends to enter the contest and having them put both names in the subject line of the email.

“This contest is the first step in the organic marketing campaign we will run to maximize our audience. We are using the power of the audience to help us tip the marketing scales in our favor. We are a small film with a modest marketing budget. Each time our audience shares socially, digitally, or via direct email this offers us as independent filmmakers increased reach. We have built our audience and made our film due to the support of the crowd. This campaign just reinforces the power of the audience in the independent film distribution model.” (Benjamin Friedberg, Executive Producer of “Speak Now”)

The contest will run thru midnight May 31st and a winner will be selected at random on June 1st and mailed the gift card. The producers of ‘Speak Now’ ask that contestants and supporters share the film with their network and download it on iTunes on June 1st so that they can try to crack the iTunes indie Top 10 charts. ‘Cracking’ this list is a great accomplishment for many independent film directors as it results in wider exposure as well as potential for foreign release deals.

“Speak Now exists due to the generous support of our Kickstarter backers, the talented cast from Warner Loughlin Studios, and the creative passion of our committed production team. We are thrilled to share our work with our audience via iTunes. Please join us in supporting the work of independent filmmakers and download a copy beginning June 1.” (Benjamin Friedberg, Executive Producer of ‘Speak Now’)

‘Speak Now’ is a romantic drama/comedy about a group of high school friends reuniting for a wedding. Setting aside their personal dramas to support the union of Tommy and Anna was the intention of the wedding guests, but as the night unfolds old offenses and newly mounting scandal plunge the group back into a pool of high school drama.

For more information on the film and contest, please visit their website at http://www.speaknowfilm.com and iTunes page at https://itunes.apple.com/us/movie/speak-now/id872214921.

About Speak Now:
‘Speak Now’ is an improvisational feature film shot on location in Los Angeles over the course of three days. ‘Speak Now’ won the Audience Award for movies in the WRITE/REC programming slate at the 2013 Austin Film Festival. Directed by Noah Harald and written by Erin Cardillo the movie is set for North American and Irish digital release on June 1st on iTunes. Release on Google Play and VHX will be announced in the coming week. Theatrical screenings will be held in Los Angeles, New York, Washington, D.C. and on demand through Tugg.com. Follow ‘Speak Now’ on Facebook at http://www.facebook.com/SpeakNowFilm and Twitter at http://www.twitter.com/SpeakNowFilm.