International Master Emory Tate signs on to teach with the Torres Chess and Music Academy. 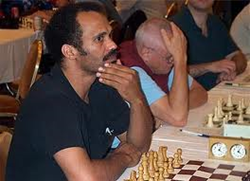 Over the board, Emory Tate is widely regarded as one of the greatest attacking chess players of our time.

During the last three years alone, Emory Tate has positively influenced at least one thousand children in the San Francisco Bay Area.

The Torres Chess and Music Academy is excited to announce the addition of International Master Emory Tate to our roster of famed chess instructors. Over the board, Emory Tate is widely regarded as one of the greatest attacking chess players of our time. Emory first received national recognition as the best chess player in the United States Air force and by winning the All-Armed Services tournament five different times, setting a record which may never be broken. After the Cold War ended in 92, Tate went into civilian life in Indiana. During these years, he became Indiana State champion a total of six different times and then Alabama State Chess Champion twice. Emory Tate currently holds the FIDE title of International Master which is only one step below the highest title of Grandmaster. However, Emory makes it a regular habit to defeat top grandmasters at the prestigious chess tournaments in which he often participates.

In the classroom, Emory Tate is known for presenting very energetic chess lessons that not only teach his students better techniques but also increase their enthusiasm for the game of chess. During the last three years alone, Emory Tate has positively influenced at least one thousand children in the San Francisco Bay Area. In fact, his ability to teach exciting lessons while maintaining a disciplined classroom has made Emory Tate one of the most sought after chess coaches in the United States.

“I take great pleasure in presenting IM Emory Tate to our chess students at the MSJE Fremont Summer Chess Camp. Our summer camp is known for equipping students with what they need to become the best chess players in the United States and in becoming National Chess Champions. I believe Emory Tate will help Mission San Jose Elementary School to not only win another National Title but, in the near future, make a clean sweep of the USCF National Elementary Chess Championships.” -Chris Torres, President of the Torres Chess and Music Academy

In addition to IM Emory Tate, the MSJE Fremont Summer Chess Camp is also providing instruction from Joe Lonsdale, James Paquette, Francisco Anchondo, Tans Hylkema, NM Eric Schiller, Chris Torres and GM Susan Polgar. The Torres Chess and Music Academy believes that this year’s Fremont Summer Chess Camp may represent the greatest collection of chess instructors ever assembled under one roof. In addition to the National Champions at Mission San Jose Elementary School, the MSJE Fremont Summer Chess Camp is open to any child who wishes to take his/her chess game to the next level during the month of July. For more information and to register, please visit the Torres Chess and Music Academy online at http://www.ChessAndMusic.com.