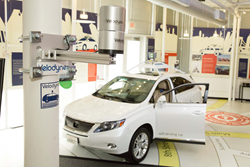 As carmakers edge closer to the era of the self-driving car, it’s instructive to look at how we got here.

That’s the premise behind a new exhibit at Silicon Valley’s Computer History Museum (CHM) -- one in which pioneering technology from Velodyne occupies a starring role.

Entitled, “Where To? A History of Autonomous Vehicles,” the exhibit chronicles the decades-long challenge of bringing self-driving cars to the general public. According to the museum, self-driving cars have remained perpetually “two decades away” since the 1930s, while autonomous and semi-autonomous vehicles have conquered the air and sea, and roamed the edges of the solar system.

The CHM exhibit coincides with this week’s landmark introduction of Google’s latest iteration of its self-driving car – one that has neither a steering wheel nor a gas pedal. The new car does feature Velodyne’s real-time 3D LiDAR sensor, mounted atop the vehicle, for object detection and collision avoidance.

Displayed prominently at the museum are Velodyne’s flagship LiDAR HDL products -- the classic HDL-64E and the lightweight, compact HDL-32E. Visitors to the Museum can witness Velodyne LiDAR in action in three installations:

At the opening VIP event, David Hall, founder and CEO of Velodyne, reminisced with other leaders in the industry, including fellow DARPA Grand Challenge competitor Chris Urmson, who now heads the self-driving car project at Google.

“It’s tremendously exciting to see that this technology has developed from a specialized, highly futuristic event like the 2004-05 DARPA Grand Challenge in the desert to now taking center stage at a mainstream museum,” Hall said. “Now, members of the general public are able to receive rides and see how object detection and collision avoidance using Veloyne's spinning LiDAR sensor really works.”

“The Museum is very excited about bringing this fascinating topic to the public,” said Kirsten Tashev, Museum Vice President of Collections and Exhibitions. “If you live in the Bay Area, Google self-driving cars are a common sight, but until now, the public hasn’t gotten a chance to see these cars up close. Even more exciting is the opportunity this exhibit presents for the Museum’s large international audience, who will be particularly excited to learn about the Google self-driving cars as well as other cool Silicon Valley companies, like… Velodyne, the company that developed the LiDAR, which is a key technology used on most self-driving cars.”

The exhibit explores the history of autonomous vehicles as portrayed in science fiction and popular culture. “Self-guiding vehicles go way back, from auto tillers on sailboats to the modern torpedo in the 1860s, and autopilots for planes before World War I,” said Marc Weber, Founder and Curator of the Museum’s Internet History Program. “Your breakfast cereal was likely harvested by a driverless combine. Robotic carts are cruising around Mars right now. Yet one deceptively modest goal has stayed in the driveway since our grandparent’s youth and that’s the self-driving family car. In this exhibit we're exploring the history of autonomous vehicles in general, and the elusive dream of a car that drives itself.”

“Where To? A History of Autonomous Vehicles” opened on May 9 and will remain on exhibit through the end of November. The Museum is located at 1401 N. Shoreline Blvd. in Mountain View. Please call (650) 810-1010 for more information.

About Velodyne LiDAR
Founded in 1983 and based in California’s Silicon Valley, Velodyne, Inc. is a diversified technology company known worldwide for its high-performance audio equipment and real-time LiDAR sensors. The company’s LiDAR division evolved after founder and inventor David Hall competed in the 2004-05 DARPA Grand Challenge using stereovision technology. Based on his experience during this challenge, Hall recognized the limitations of stereovision and developed the HDL64 high-resolution LiDAR sensor. More recently, Velodyne has released its smaller, lightweight HDL 32E sensor, available for many applications including UAVs. Since 2007, Velodyne’s LiDAR division has emerged as a leading developer, manufacturer and supplier of real-time LiDAR sensor technology used in a variety of commercial applications including autonomous vehicles, vehicle safety systems, 3D mobile mapping, 3D aerial mapping and security. For more information, visit http://www.velodynelidar.com. For the latest information on new products and to receive Velodyne’s newsletter, register at http://www.velodyne.com.

About the Computer History Museum
The Computer History Museum in Mountain View, California, is a nonprofit organization with a four-decade history as the world’s leading institution exploring the history of computing and its ongoing impact on society. The Museum is dedicated to the preservation and celebration of computer history, and is home to the largest international collection of computing artifacts in the world, encompassing computer hardware, software, documentation, ephemera, photographs, and moving images. The Museum brings computer history to life through large-scale exhibits, an acclaimed speaker series, a dynamic website, docent-led tours, and an award-winning education program. The Museum’s signature exhibition is “Revolution: The First 2000 Years of Computing,” described by USA Today as “the Valley’s answer to the Smithsonian.” Other current exhibits include “Charles Babbage's Difference Engine No. 2,” IBM 1401 and PDP-1 Demo Labs. For more information and updates, call (650) 810-1059, visit http://www.computerhistory.org, check us out on Facebook, and follow @computerhistory on Twitter