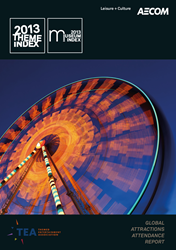 In the U.S., the leisure industry is now the number-two producer of jobs in the private sector after health care. In China, India, and Latin America, this industry is growing at a rapid rate as middle class markets emerge. -- John Robinett, AECOM

This version contains updated figures (as of June 5, 2014) and should be used in place of any previous version for 2013.

Published by the Themed Entertainment Association (TEA) and the Economics practice at AECOM, this report is available free on the AECOM website at http://www.aecom.com/themeindex and on the TEA website at http://www.teaconnect.org/pdf/TEAAECOM2013.pdf. It will also be distributed in a print version and Chinese-language translation at the IAAPA Asian Attractions Expo in Beijing, June 17-20.

John Robinett, senior vice president, economics, at AECOM, says, “There is a global rise in the importance of leisure as a driving influence in culture and economies. In the U.S., the leisure industry is now the number-two producer of jobs in the private sector after health care. In China, India, and increasingly in Latin America, this industry is growing at a rapid rate as middle class markets emerge. Barring major economic or social disruptions, this should continue into the future.”

Some key figures from the report:

The TEA/AECOM Theme Index and Museum Index is a collaboration of the Themed Entertainment Association (TEA) and the economics practice at AECOM, a global provider of technical-professional and management-support services. This calendar-year study of global attractions attendance is a free resource for park operators, land developers and the travel industry. Top worldwide theme parks, amusement parks, water parks, museums and theme park group operators are named, and industry trends are identified.

TEA president Christine Kerr of BaAM Productions says, “Leisure and travel industries are maturing in the West and breaking new ground in the East. It's an exciting, creative time for our industry. We are honored to be partnering with AECOM for the seventh consecutive year on this annual study, a critical resource for anyone with an interest in the leisure and travel sector.”

“2013 represents the fourth straight year of growth in North American theme parks since the worst of the Great Recession. The estimated 135.1 million visits to the top 20 parks equates to 3.6 million more visits, 2.7 percent higher than in 2012. Compared to 2004 (115.4 million visits), the increase is 17 percent. By contrast, the U.S. population grew about half as quickly, at 9 percent, from 2004 to 2013. All major operators with significant operations in North America reported increased per-capita revenues, some markedly.”

“Latin America’s top theme/amusement parks saw 13.7 million visits in 2013, representing growth of 3.8 percent or 500,000 visits - good given the slowing of the Latin American economies, though it must be acknowledged that on a same park basis, growth was only about 1 percent.”

ASIA-PACIFIC
Chris Yoshii, vice president, Economics, Asia-Pacific, AECOM
“2013 was a very strong year overall for theme parks and water parks in Asia. The top theme parks had a combined attendance increase of 7.5 percent. Water parks came in at a 6 percent increase - well above 2012 levels. The five parks with the greatest attendance increases (Tokyo Disneyland at 15.9 percent, Tokyo Disney Sea at 11.3 percent, Hong Kong Disneyland at 10.4 percent, Lotte World at 15.9 percent, and Seoulland at 8 percent) all added attractions and underwent expansions and/or renovations.”

EUROPE & MIDDLE EAST
Jodie Lock, senior analyst Economics, Europe, AECOM
“Overall performance at European theme parks was mixed in 2013, giving rise to yet another static year for the top 20 parks. The picture displays an aggregate stabilized attendance figure of 58 million visitors. The U.K. tourism sector had a fantastic year. But in Southern Europe, parks were prevented from reaching their full potential due to the challenging economic situation.”

Another emerging economy to watch is Russia.

MUSEUMS
Linda Cheu, vice president, AECOM
“The top 20 museums worldwide showed 7.2 percent growth in attendance at an estimated 105.6 million visits, up from 98.5 million in 2012. With the economy improving, we’re seeing endowments starting to increase for those museums that have them - as well as earned income, now that visitors have more money to spend on leisure activities. The last five years have been a major wakeup call for museums in general - especially those dependent primarily on one income source.”

About TEA
The TEA (Themed Entertainment Association) is an international nonprofit alliance founded in 1991 and based in Burbank, Calif. TEA represents some 8,000 creative specialists, from architects to designers, technical specialists to master planners, scenic fabricators to artists, and builders to feasibility analysts working in some 1,000 firms in 40 different countries. TEA presents the annual Thea Awards and the TEA Summit and hosts the annual SATE conference (Story, Architecture, Technology, Experience). TEA produces a variety of print and electronic publications, including the annual TEA/AECOM Theme Index, TEA Annual & Directory and Thea Awards Program. Visit http://www.TEAconnect.org.

About AECOM
AECOM is a global provider of professional technical and management support services to a broad range of markets, including transportation, facilities, environmental, energy, water and government. With approximately 45,000 employees around the world, AECOM is a leader in all of the key markets that it serves. AECOM provides a blend of global reach, local knowledge, innovation and technical excellence in delivering solutions that create, enhance and sustain the world's built, natural, and social environments. A Fortune 500 company, AECOM serves clients in more than 150 countries and had revenue of $8.0 billion during the 12 months ended March 31, 2013. More information on AECOM and its services can be found at http://www.aecom.com.

For additional figures and analysis of global theme park attendance, links to previous editions of the TEA/AECOM Theme Index and Museum Index are available for several years back, including 2012, 2011 and 2010. More can be accessed on the TEA Connect blog.