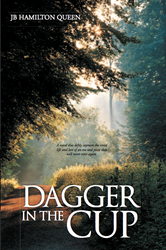 By increasing the number of female heroes, we can begin to alter the negative way in which women are perceived globally.

We often hear tales of how the lives of women have drastically improved, but with events such as Nigerian kidnappings, workplace discrimination and abuse, has anything really changed?

Author, JB Hamilton Queen believes there needs to be more strong female roles in popular culture. She makes a point to position young and independent women as the protagonists in all her novels.

“I believe all young women must have a positive female role model they can lean on, Queen said. “By increasing the number of female heroes we can begin to alter the negative way in which women are perceived globally.”

Her newest book, “Dagger in the Cup” is a fictional thriller about a teenage heroine living in the mountains of Virginia who saves her family from an abusive stepfather. The book provides a suspenseful and exciting plot while addressing hot button issues such as women’s reproductive rights, race and stereotypes.

About the Author
JB Hamilton Queen grew up in Kentucky and now lives with her husband in Sarasota, Florida. An award-winning author of short stories and memoirs, she has contributed to magazines, such as Nostalgia Digest, Doorways, and Yesterday's Magazette. She has a deep love for the south, and enjoys bringing her heritage to the page; the beauty of the countryside, the strength of those who live there, and the courage that dwells in their hearts. In addition to Dagger in the Cup, she has written Raincrow, Sweet Gums, Imminent Reprisal, and Masters of the Breed.