Crowds, Competitors Have a Blast at the First Bull Burger Battle of 2014

Thirteen competitors whipped up their best burgers for a chance at competing in the World Food Championships in Las Vegas. 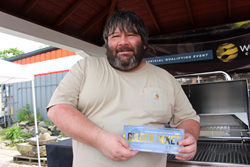 Skip Day of Wantagh, NY wins the first Bull Burger Battle of 2014 on May 31 at Best in Backyards in Mahopac, New York.

We were thrilled to see so many families enjoying the Bull Burger Battle. We are looking forward to hosting more great events in the future.

Best in Backyards is happy to announce that the first Bull Burger Battle of 2014 was a huge success, thanks to a fantastic group of competitors whose creativity and talents led to close scores and an exciting awards ceremony.

Skip Day of the Swamp Pit BBQ team took first place at the event, which was held at Best in Backyards in Mahopac, NY. His "Infamous Skippy Burger" consisted of a patty melt on two slices of Rye bread, with American and pepper jack cheese, sautéed onions and shallots. Day also used what he described as a "Jersey-inspired salami."

"We're ecstatic. I actually didn't think we hit it as well as we did," he said shortly after the winners were announced. Traveling from his home in Wantagh, NY, Day brought along his daughter Elizabeth as an assistant for the cook-off. "She told me, 'You're out of your mind, these are the best burgers I've had, the best ones you made.' So I felt much more confident then, but I came up knowing that a lot of competitors out here had a lot of good stuff."

With his first-place creation, Day has won a premium Bull outdoor Angus grill (valued at $2,500) and a trip to Las Vegas to compete in the World Food Championships in November.

Day, a barbecue-lover who has been grilling since he was 8 years old, first dreamt up the Infamous Skippy Burger in 2006 for a cooking gathering. He has since made tweaks to the recipe for events like the Bull Burger Battle. A similar version won first place at a Long Island burger cook-off in 2009.

While the competitors concentrated on their grills, family and friends enjoyed face painting, food tastings (delicious pizza made on the grill, thanks to a pizza stone from Bull Outdoor Products), product demonstrations and live radio entertainment from 100.7 WHUD.

The children played on the many swing sets and trampolines on display at the showroom. Many attendees entered a drawing in the hopes of winning a trip to Las Vegas to watch the World Food Championships live. With all the activity, even a couple of brief rain showers could not stop all the fun!

"We were thrilled to see so many families enjoying the Bull Burger Battle," said Scott Honigsberg, one of the owners of Best in Backyards. "We are looking forward to hosting more great events in the future."