Founder and chairperson of BRAC awarded honorary Doctor of Laws along with five others. 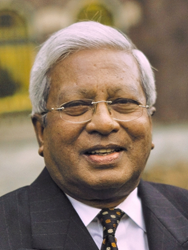 He has created a model of how to have a lasting impact on those in need; he himself is a model of what it means to live one's life in the service of humanity.

Sir Fazle Hasan Abed, founder and chairperson of BRAC, received an honorary Doctor of Laws degree by Princeton University this week. The university awarded Sir Fazle one of five honorary degrees given at its commencement exercises on Tuesday.

In its official citation, the university commended Sir Fazle’s commitment to poverty alleviation, calling BRAC, which he founded in 1972, “a profoundly effective and universally admired organization committed to alleviating poverty for millions worldwide.”

Formerly Bangladesh Rural Advancement Committee, BRAC is known as a global leader in alleviating poverty by creating opportunities for the poor to take control of their lives. It has been called one of the most cost-effective nonprofit organizations in the world, using a wide variety of data-driven tools including microfinance, healthcare, education, legal right and more.

The citation from Princeton said, “His organizational and leadership skills, combined with his ceaseless commitment to uplifting the less fortunate, have led to innovative and enduring programs in economic development, education and health care. He has created a model of how to have a lasting impact on those in need; he himself is a model of what it means to live one's life in the service of humanity.” Sir Fazle also founded BRAC University, a full-fledged university in Dhaka, Bangladesh, in 2001.

BRAC, a development organization founded in Bangladesh in 1972, is a global leader in creating opportunities at scale as a means to end poverty. With more than 100,000 employees, it is the world's largest non-governmental organization, touching the lives of an estimated 135 million people in 12 countries using a wide array of antipoverty tools such as microfinance, education, healthcare, legal rights training and more. Learn more at BRAC.net.

BRAC USA is an independent, US-based grantmaking affiliate of BRAC formed in 2006 to advance and support BRAC's global mission to create opportunities to unleash human potential and end poverty. Learn more at http://www.bracusa.org.