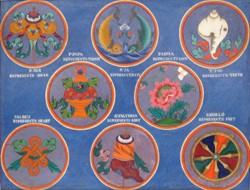 Known as Tashi-Takgyae in Tibetan, it is the direct translation for “eight auspicious symbols.” Called Ashtamangala in Sanskrit, apart from Buddhism, the eight auspicious signs are a sacred element to several other Indian religions such as Hinduism and Jainism.

These eight auspicious symbols or the symbol of good fortune represent the sacred offerings made by the gods to the Lord Buddha immediately after he gained enlightenment. And it is believed that the signs are the energetic signatures that point to the great qualities of enlightened mainstream.

As for the interpretation of the eight auspicious symbols, it varies from one Guru to another, some common definition of the symbols in brief are as below:

1. White conch represents the beautiful and melodious sound of the Buddha’s teaching, which awakens the disciples from the deep slumber of ignorance and put them on the right course of learning the Dharma and to work for the welfare of others.
2. Precious parasol, also known as the sacred umbrella symbolizes that it protects and shields one from all sources of sufferings and gives comfort under its shade.
3. Victory banner represents the victory over all sorts of obstacles and negativities.
4. Golden fish pair represents the state of fearlessness of all the beings without danger of drowning in the ocean of suffering, just like fish can happily survive in ocean.
5. Dharma wheel symbolizes the importance of turning the precious wheel of Buddha’s teachings in order to attain well-being for all.
6. Endless knot signifies the interdependence of the religious doctrine and secular affairs, as well as the union of wisdom and method.
7. Lotus flower represents the complete purification of body, speech and mind from all the negative elements, and let them blossom like lotus.
8.Treasure vase represents good health, long life, wealth, prosperity, wisdom and the phenomenon of space.