Jim Blasingame’s "The Age of the Customer" Wins IPPY Award 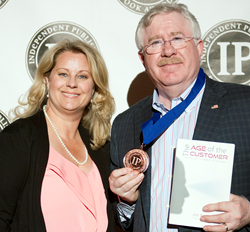 When it comes to delivering a tough love story to business leaders, Jim Blasingame is the best. —Steve Forbes, Chairman & Editor-in-Chief, Forbes Media

Award-winning thought-leader on small business and entrepreneurship, Jim Blasingame has received an Independent Publisher Book Award for his third book, “The Age of the Customer: Prepare for the Moment of Relevance.” Presented in conjunction with the NYC Book Expo, and known as an “IPPY,” the awards are given annually by “Independent Publisher” magazine to the best books published by the fast-growing independent publishing sector.

“It’s a great honor to receive the IPPY Award,” said Blasingame. “We worked very hard to produce a quality book that could make a difference in the lives of millions of business leaders worldwide. Based on early sales, comments from readers and now this award, it looks like we’re accomplishing that goal.”

“The Age of the Customer,”available in hard cover and e-book formats, has sold 35,000 copies since being released in January. In total, Blasingame has sold over 120,000 copies of all three of his books. Blasingame’s books are published by independent publisher, SBN Books, a subsidiary of Small Business Network, Inc.

“Congratulations to Jim Blasingame on this important award for his new book,” said Deltina Hay, board chair of the Independent Book Publishers Association (IBPA). “With over 120,000 hard cover books sold since 2002, this success track record by Jim and SBN Books proves that today, compelling content, professionally published, is more important than the name brand of a publisher.”

In the book Blasingame reveals how the 10,000 year-old Age of the Seller is being replaced by The Age of the Customer®, and how businesses large and small can avoid being disrupted by what he calls a once-in-a-lifetime tectonic marketplace shift. Blasingame is uniquely qualified to chronicle such marketplace foresight. For more than 16 years he has conducted over 1,000 live interviews annually with business thought-leaders on his nationally syndicated radio program, The Small Business Advocate® Show.

“When it comes to delivering a tough love story to business leaders, Jim Blasingame is the best,” said Steve Forbes, Chairman and Editor-in-Chief of Forbes Media, who wrote the Foreword. “As you read, you’ll alternate between seeing Jim as a prophet or a heretic, depending on where you are on your journey of understanding about the transition from the old age to the new one.”

Blasingame is recognized as one of the world's leading experts on small business and entrepreneurship. He is president of Small Business Network, Inc., but remains best known as the creator and host of the nationally syndicated weekday radio program, The Small Business Advocate Show. He is also a syndicated columnist for newspapers and business journals, plus online publications, including Forbes.com and Nasdaq.com.

For his work and leadership on behalf of small businesses and chambers of commerce, Jim received the coveted Champion of the Chamber award by the American Chamber of Commerce Executives. He has also received national awards from the U.S. Small Business Administration, the Association of Small Business Development Centers, Small Business and Entrepreneurship Council and New York Enterprise magazine. TALKERS magazine has recognized Blasingame as one of the most important radio talk show hosts in America.

The Small Business Advocate® Show is the flagship brand of the media company, Small Business Network, Inc. (SBN), of which Blasingame is founder and president. SBN produces and distributes multi-media small business resources worldwide. Insperity is the Presenting Sponsor of all of Blasingame’s media productions.

The SBN websites are: SmallBusinessAdvocate.com and AgeoftheCustomer.com. The Small Business Advocate® and The Age of the Customer® are registered trademarks of Small Business Network, Inc.