Ensuring healthy, home-cooked meals, offering a family-like setting that feels like home, leading activities that encourage creativity and socializing, and encouraging residents to play a role in their own care are some of the many ways this new holistic approach to elder care is setting a new standard. 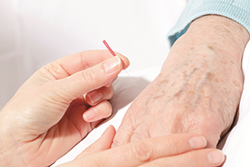 Acupuncture lowers stress and improves sleep for our residents.

Under the leadership of a naturopathic medical director, Living Well works with 52 different local food suppliers to serve farm-to-table meals.

To understand the way a senior care facility can transform in one year, talk to Sherry O’Grady. O’Grady, who is director of nursing with Ethan Allen Residence in Burlington, Vermont, has watched the facility transition from a traditional residence for seniors to its current role, operating as a holistic center focused on the health of the body, mind and spirit of its residents. “Here, they can flourish,” says O’Grady. “Because they’re encouraged.”

The changes began taking root in 2013, when Living Well purchased the facility. The non-profit has been operating Living Well Residential Care Home in Bristol, Vermont, for 10 years, and sought to expand its holistic model, which ensures healthy, home-cooked meals; offers a family-like setting that feels like home; leads activities that encouraged creativity and socializing; and encourages residents, when possible, to play a role in their own care.

The effects were immediate: Processed foods and meal substitute products were replaced with locally grown fare from area farms. Residents were encouraged to spend more time outside of their rooms, enjoying communal spaces and participating in hobbies, such as gardening. A calendar of regular activities circulated, such as painting classes, music classes, tai chi, trips to the mall for walking and more. And everyone was told that they had a voice—residents, housekeeping staff, kitchen workers and all. The facility would be governed by a model called dynamic governance, which encourages participation in decisions that impact the community.

Today, O’Grady says that the Ethan Allen looks like a different place. Thanks to consistent interaction and encouragement, she says that a number of residents have shown signs of improvement in being more independent, taking fewer medications, and expressing more interest in being a part of the greater Ethan Allen home. “We give them consistency in the routine, good care and encouragement to function at a level they weren’t able to function before,” says O’Grady. “And it’s working.”

According to the government report, “Older Americans 2010: Key Indicators of Well-Being,” by 2030, there will be 72 million men and women ages 65 and older in the U.S. That’s nearly double the number of 65-year-olds there were in 2000.

That, says Dee DeLuca, executive director and a co-founder of Living Well, is going to alter the landscape of residential care. “We have 10,000 people a day turning 65 for next 15 years,” she says. “Out of that, 20 percent, or 2,000 people a day are going to need some kind of oversight, some kind of care to meet their needs. That will be not in their home.”

DeLuca says that many of those people will be looking for an alternative to what’s considered the traditional care facility. She and a small group of community members founded Living Well in Bristol, Vermont, 10 years ago, for that very reason. She says it’s the kind of place that she would one day want to live.

“I said if I need this kind of care, where would I go? Where would I find fresh and local food, yoga, tai chi and the choice to not take so many medications? And I realized there wasn’t anything like that out there,” says DeLuca. So she teamed up with five like-minded friends to create it.

Under the leadership of a naturopathic medical director, Living Well works with 52 different local food suppliers to serve farm-to-table meals (at every meal, a chalkboard lists the farms from which different items come, as you’d find in a restaurant) and the facility has managed to save money through the process, by striking up partnerships and buying in bulk. “The cost per day is lower than the national average,” says DeLuca.

While each patient consults with his or her own physician, the staff at the residence encourages a natural approach whenever possible. That could be as simple as using ice or heat packs in place of pain medications, or trying a natural anti-anxiety remedy coupled with tai chi, yoga or exercise. For many patients, it’s meant working with their physician to scrutinize the medications that they’ve been on for years—including oxygen—to determine if they are medically necessary any longer. In a number of cases, those doses have been stepped down or even taken away.

Because Living Well has only 15 beds, there’s a natural, family-like sensibility to the home. At Ethan Allen, the 34 rooms are grouped into “neighborhoods” to establish a similar small group setting. That way, says DeLuca, the residents have an easier time establishing relationships and feeling like a part of the community. “The higher functioning people keep an eye out for the more vulnerable people,” she says. “The men pull the chairs out for the women. No one gets lost in the crowd.”

DeLuca says that the guiding philosophy of “dynamic governance,” also known as “sociocracy,” is a system of organization that originated in The Netherlands, and gives everyone in the community a voice, whether it’s the residents who live there, the housekeeping staff who works there or the executives. It’s a system that involves transparency in how the facilities operate. It encourages people who work at all levels to suggest solutions. And, says DeLuca, it makes everyone accountable to themselves and each other. “When you have a system where all the voices in the organization have equal weight when it comes to policy, that actually encourages everyone to speak their mind.”

DeLuca says that operating in that fashion makes her job a pleasure. “What I’ve noticed after 10 years is I get to steer creativity, rather than discipline and be a policeman all the time,” she says.

Kathleen Hall, who is a nurse geriatric nurse practitioner and director of research with Living Well, says she’s seen the arts programs at the facilities make a difference in patients, particularly in those with dementia, who are struggling to communicate. “When we give them an opportunity to garden or to paint it allows a sense of self expression,” she says. “That lowers anxiety and it lowers depression.”

***
Although the Living Well model has been in place for 10 years, the staff says that, to date, they have more anecdotal information about its benefits than anything. Now that the organization is overseeing more beds, with the addition of Ethan Allen, researchers like Hall are capturing data and working to measure the impact of the holistic approach. It’s something that the organization plans to share, in coming years, to help shape other facilities.

“Over 10 years, we’ve been very quietly doing what we know works,” says DeLuca. “Today, farm-fresh food, yoga, music and art therapy and natural approaches to health care are not such radical ideas. Our goal, in the next five years, is to provide the data to show that this works, and lead others through our example.”