As the newest member of StoneFly's Scale Out NAS family of products, the SSO allows businesses to add server nodes on the fly, as well as add CPU horsepower and storage capacity from additional SSO nodes. This linear scalability provides predictable performance and allows users to pay as they grow, and to only buy what they need. 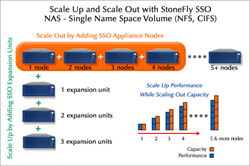 SSO is the most flexible platform on earth. You can start small and grow as big as you want -- a natural fit for big data. Optimized for storing media and backup, build it one node at a time and scale both capacity and performance as you add nodes

The Scale Out NAS feature of the SSO allows companies to "scale out" as their business grows by adding nodes without losing performance. With the SSO, volumes can be expanded across multiple nodes using no metadata and a single namespace. Usable bandwidth increases as new nodes are added. Best of all, multiple nodes can be managed with just a single user interface. Each time the SSO is scaled out, it adds more capacity, more throughput, and more concurrency. Installation, management, and scaling is simple to achieve at any size.

"SSO is the most flexible platform on earth. You can start small and grow as big as you want -- a natural fit for big data. Optimized for storing media and backup, build it one node at a time and scale both capacity and performance as you add nodes," said Mo Tahmasebi, president and CEO for StoneFly.

StoneFly SSO™ "Super Scale Out" series of NAS appliances were designed for customers requiring a powerful storage solution that can scale out storage capacity while scaling up performance. SSO Super Scale Out NAS nodes scale up to 36 drives and 216 TeraBytes of storage per chassis, up to 108 drives per node, and easily scale out to multiple nodes on demand. Perfect for managing large quantities of unstructured (file-based) data within a single global namespace and a single file system.

Like its older sibling, the StoneFly TSO (Twin Scale Out) which began shipping in January, SSO appliances were designed for markets that require vast quantities of high bandwidth throughput or fast parallel throughput for very large files required by high performance computing in media and entertainment.

Content creation, transformation, production, and archive, as well as unstructured data (documents, presentations, pictures, music, and video files) are best stored in large Scale Out NAS appliances like the StoneFly SSO and TSO. SSO simplifies the storage of media and is the ideal platform for consolidation onto a shared resource implementing higher utilization.

SSO was designed to be used for ultra fast primary storage for visual effects and high IO-intensive media production applications that require high-concurrent sequential throughput, post-production transcode, and streaming media. It drives down the overall cost of storage, while increasing performance for applications that need it when they need it, and reduces costs and floor space requirements. Capacity can be quickly provisioned, shared, and managed with fewer resources. StoneFly SSO is efficient to operate since it leverages all of its resources, maximizes utilization, and integrates nearline SAS, enterprise SAS, and SSD tiering within the storage nodes.

Scale Out NAS is a distributed file system that can scale to several petabytes, all while handling thousands of clients. It functions as a distributed data overlay, polling together storage building blocks over TCP/IP, aggregating disk resources and managing data in a single global namespace. The unified platform handles blocks, files, objects, and big data.

StoneFly, Inc., headquartered in Hayward, was founded in 2006 to deliver upon the vision of simple and affordable storage optimization and disaster recovery protection through IP SAN solutions. StoneFly is a business division of Dynamic Network Factory, Inc. (DNF), a leading maker of high-performance, network-attached storage, storage area networks, RAID and iSCSI systems. For more information on StoneFly, please visit http://www.stonefly.com and http://www.iscsi.com.

StoneFly and the StoneFly logo are trademarks or registered trademarks and the property of StoneFly, Inc. All other company and product names contained herein are property of their respective owners.