A Body Has Been Found Wearing Annie’s Clothing

When a body wearing her ten-year-old kidnapped daughter’s clothes is found on the beach, Ruth Butler has to rely on her instincts, her belief that her daughter is still alive, and an undercover detective who is in Perrins Point in Cornwall, England on unrelated business. Will she be able to find Annie? 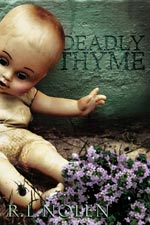 A desperate mother runs away from Houston, TX with her infant daughter to protect her from her evil husband. After finding a safe haven in Perrins Point – Cornwall, England for 10 years, Ruth’s daughter disappears. The psychopath hiding within the village confuses Ruth with his dead mother and begins hearing the nagging voices again which will stop only after he kills her again. An undercover detective named Jon Graham, working on a separate case finds himself trying not to blow his cover but once he meets Ruth he can’t help but get involved; in R. L. Nolen’s book “Deadly Thyme” (ISBN 9781939889140, Skipjack Publishing, 2014).

Ruth embarks on a desperate search for her missing daughter with the help of Detective Graham, but neither of them can look for the ten year old openly. Ruth could be deported for living in England under an alias, and Jon Graham must not taint his unrelated investigation, though his key suspect is fast becoming a suspect in Annie’s disappearance. The trail takes them from the body found on the beach to the cave where the killer drains his victims of blood. Is the killer planning to do the same to Annie, or does he have a special purpose for her?

R. L. Nolen’s thrilling story is hooking readers who pick up the book from the start. “The very first page of this book chilled me to the bone…the ending was perfect, full of cliff-hanging drama and suspense, and for me - skin crawling fear,” admits Sheri Bebee, book reviewer for Reader Views. Furthermore, it seems Nolen’s book will gain her new fans, as reader Harmony commented in her Amazon review: “Ms. Nolen is an author I would highly recommend, and I shall certainly be reading more of her books.”

About the Author
Born in Houston, Texas, Rebecca Nolen was reminded of her British heritage throughout her childhood. She loved to read. Whenever she could she would escape chores and responsibilities to read in the tree-house out back or under the covers late at night. Rebecca loved books that took her away to exotic places. Rudyard Kipling, Charles Dickens, and Charles Costain were her favorite authors, and she longed to become a writer as well, to share the joy of discovering far-away places with others. After a devastating car accident, she had to learn to find the right words again. Realizing that nothing in life is guaranteed, her life-long goal of becoming a writer became her obsession. After years of attempting traditional publishing, the tides of time and change presented the opportunity to self-publish. Far from being finished, Rebecca has many, many more projects to tackle including a historical YA novel, a picture book or two (she is an illustrator also), and some more middle-grade novels, she is plowing ahead with her dreams. Rebecca Nolen is also the author of “The Dry”.