Concerns for unanswered questions to the GMO food industry (1) and EPA continue as Moms Across America plan to march in over one hundred 4th of July parades in America. Additionally, MAA moms have been working diligently to gain the EPA's consideration of increasing evidence (2) supporting glyphosate dangers in its current review process. 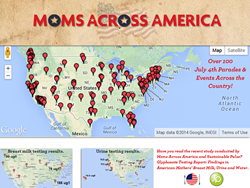 Moms Across America is gearing up for over one hundred fabulous July 4th events around the nation.

Glyphosate is not harmless, as previously claimed. In fact, many scientists state it is the root cause of 1 in 2 children possessing chronic illness today. After finding it in breast milk, Moms agree. We want the EPA to take action & protect our children.

For the second year, Moms Across America are gathering around the country to spread awareness of GMOs because they have seen the health of their children improve when they remove genetically modified, or GM foods, from their children's diets. These peaceful gatherings, held in over a hundred 4th of July parades throughout America are growing in popularity because many believe that every U.S. citizen has a right to know if GMO ingredients are used in the foods they choose to feed their families. MAA invites individuals and families around the United States to join in on the festivities and help to spread awareness and concern of GMO hazards (1). Interested persons can quickly search the MAA website to locate upcoming nationwide events.

Today, many people know a child affected by food allergies, asthma, or autism. Moms Across America sees that the future and potential of an entire generation of children is being stolen from them because of the impact to their health from GMOs and glyphosate(1 & 2), which is sprayed on GMOs during growing, is allowed on 160 of our food crops by the EPA, and is sprayed as a drying agent on many of our food crops; such as sugar, wheat, rice, soy, corn and dried beans. Glyphosate is registered with the USPTO as an antibiotic (destroys beneficial gut bacteria, where the immune system is rooted), is a chelator (vitamin deficiency) and is acknowledged by the EPA to cause, “kidney damage and be a reproductive effector, (birth defects).”

Glyphosate was recently found by MAA Moms in their breast milk at 76, 99 and 166 ppb(3) - levels higher than has been shown to destroy the gut bacteria in chickens. Serious harm has been documented to mammals from glyphosate; including infertility, sterility, kidney disease, endocrine disruption (miscarriage) and is also linked to autism.(2) Glyphosate is reported by scientists to break down the blood brain barrier increasing the toxic effect of environmental toxins, while leaving children particularly vulnerable. In response to the growing amount of evidence that glyphosate is bio-accumulating within body tissues, the MAA group is visiting the EPA on July 2nd to demand the agency recall glyphosate (Roundup), revoke the license of glyphosate, and offer EPA staff free glyphosate urine tests.

This growing group of mothers, comprising of over 310 leaders in 45 states, questions the effectiveness of the EPA to protect our nation's children. Despite continued rhetoric that GMO technology intends to feed the world, countries have continually rejected GM foods. (1) MAA understands the intention to put insecticides and herbicide-resistant traits into the food our nation eats was originally intended to reduce the quantity of insecticides and herbicides sprayed on the food consumed. The evidence presents the opposite truth where instead, weed resistance increases and glyphosate use continues to increase - now at 73 percent of the total herbicides applied in 2013, alone. Additionally, last year, the EPA permitted substantial increases to the glyphosate residue tolerances approved for a large number of edible crops. (4)

Resistance from Mothers to have herbicide residues present within their food is also increasing. As part of this year's July 4th marches, this group of Moms asks the EPA to acknowledge that, despite the claims of safety, pesticide and herbicide use have, in fact, increased and so have the health problems within our children and country. Moms Across America knows this government agency wants to help the world. These Moms ask EPA staff to have the courage to acknowledge that GM practices and glyphosate are damaging our health and environment.(2) Moms have seen the recent and new scientific studies on the impact of GMOs and glyphosate - and have witnessed the results firsthand in their children. Moms Across America demands that the EPA, at the very least, make a statement that pregnant and breast feeding mother’s should avoid these chemicals and eat organic.

The automotive industry issues a recall when their product is suspected of causing harm. After finding glyphosate in breast milk at levels 760-1600 times higher than allowable levels in Europe’s drinking water (3), and discovering that this chemical does not “pass harmlessly though the urine,” but instead is also found in breast milk, MAA also appeals to chemical manufacturers to recall glyphosate-containing herbicides and cease GMO seed production until the consumption and long-term use of such products are proven safe - by independent, unbiased third parties.

MAA would be proud if this government agency, supported by tax payers' dollars, put the health of our nation first and rescinded approval for selling GMO seeds as well as the use of spraying glyphosate and other harsher chemicals. Visit their website at http://www.momsacrossamerica.com for more information and complete details on planned parades, marches, and other gatherings.