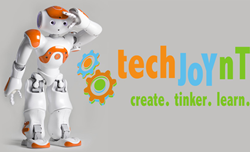 techJOYnT lets your imagination run wild with their NAO Robot

RobotsLAB calls NAO the ideal companion for teaching Robotics as well as STEM topics to all levels, from secondary to higher education.

techJOYnT Academy offers students the rare opportunity to learn using the NAO robot, transforming STEM education in the process. This complex robot not only has limitless possibilities and is available for students to learn how to use, but also keeps students actively engaged in the classroom. The NAO is part of techJOYnT’s mobile STEM Lab, deigned for teaching Science, Technology, Engineering, and Math courses at their Rockwell Plaza campus and satellite campuses at Oklahoma City Community College, University of Oklahoma's Center for the Creation of Economic Wealth, and MetroTechnology Centers.

The NAO is an autonomous, programmable humanoid robot developed by Aldebaran Robotics. RobotsLAB calls NAO “the ideal companion for teaching Robotics as well as STEM topics to all levels, from secondary to higher education.”

Ray Shaik, President and CEO of techJOYnT, said, “By using the NAO robot in class, students connect theory and practice, develop teamwork and communication skills, and gain a higher level of motivation and interest in technical career paths.”

Students love to learn using the NAO robots offered by techJOYnT Academy. In techJOYnT’s Humanoid Robotics course, students use the NAO to study the basics of Node and Python programming while using touch and motion sensors to initiate complex movement such the fun Choreographe program that allows the NAO to dance. However, the fun does not stop in robotics classes. The NAO can play a key role in STEM, Computer Science, Physics, Math classes, and can even help autistic students communicate. Research has suggested that student engagement when working the NAO is significantly higher than in the more traditional STEM classroom.

Technology is rapidly evolving every second, yet countless reports have been released indicating a deficit in the number of students entering STEM fields. Simply put, students do not receive the same kind of recognition or incentive for pursuing STEM as they do for other activities like sports. techJOYnT's mission is to counteract this growing deficit and help students better prepare for their future careers by teaching practical skills through the NAO and other services.

In addition to using the NAO robot in class, techJOYnT also sells the NAO Evolution and trains educators on how to use it. MetroTech recently bought four NAOs from techJOYnT, which played a key role in making the MetroTech Robotics program number 1 in the state of Oklahoma.

techJOYnT offers families, students, and mentors the opportunity to learn engineering and entrepreneurship concepts through hands-on robotics and game design projects. For more information, follow techJOYnT on Facebook and Twitter.