Stars from BET’s “The Game” and “Being Mary Jane,” Among Others Joined Hundreds of Fans in Sending USO Thank You Notes to Troops at the 2014 BET Experience

USO wraps up African American Music Month on high note, pushing out more than 300 messages of support online and serving as the only military non-profit onsite at America’s largest free fan festival. 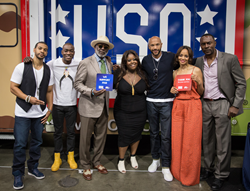 It has been an honor to participate in the BET Experience... and join BET fans in supporting our service members...," said Juliet Gilliam, USO Vice President of Celebrity Recruitment. "We are grateful... and hope they will be inspired to continue...

ARLINGTON, VA. (July 1, 2014) – In celebration of African American Music Appreciation Month and the USO’s “Every Moment Counts” campaign, the USO joined forces with BET Networks and pushed out more than 300 “Thank You Notes for the Troops” at the BET Experience Presented by Coca-Cola® Fan Fest June 28 and 29, 2014. The only military non-profit who participated in this year’s BET Experience Fan Fest, the USO deployed a camo-covered Mobile USO to the Los Angeles Convention Center and invited attendees to create and send personalized “Thank You Notes for the Troops” via social media as part of the partnership activation.

Attributed to Juliet Gilliam, USO Vice President of Celebrity Recruitment:
"It has been an honor to participate in the BET Experience this weekend and join BET fans in supporting our service members and families. Our troops often miss everyday special moments like those we have enjoyed seeing this weekend and having the ability to send ‘thank you notes to the troops” created a wonderful opportunity to show our gratitude for their sacrifice. We are grateful to the BET fans that visited Mobile USO and hope they will be inspired to continue spreading messages of thanks to honor our troops and their families."

Attributed to Sonya Lockett, Vice President of Corporate and Social Responsibility, BET Networks:
"BET Networks was excited to have the USO be a part of the BET Experience Fan Fest. We have great respect for the sacrifices made by the men and women who serve in our nation's military and were honored to work with our partners at the USO to help send these notes of thanks."