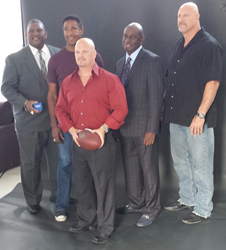 Since taking the country by storm four years ago, Pro Player Health Alliance (PPHA) has treated hundreds of former professional athletes and their families for sleep apnea. Their mission has received increasing coverage in the media after PPHA began working through the Living Heart Foundation and its HOPE Program sponsored by the NFL Players Association (NFLPA). Recently it has been confirmed that PBS will be producing a short film in Chicago with Richard Dent, Roy Green, Archie Roberts who is the founder of Living Heart Foundation and other unconfirmed players in regards to tackling sleep apnea with NFL greats.

In addition to Dr. Todd Swick, Board Certified Sleep M.D., David Gergen, President of PPHA and Dental Director of the American Sleep and Breathing Academy, will also be featured in the film with Dr. Wolf who is a member in the academy and has taken hours of courses on dental sleep medicine. Mr. Gergen has said in reference to the several previous and planned health evaluations in different cities for retired NFL players, “Andre Collins of the NFLPA and Dr. Roberts of the Living Heart Foundation are doing a fantastic job of helping the former players. Without them, a lot of these guys wouldn’t have been treated.” Traveling the country to conduct health evaluations for the players is all part of the HOPE Program created by Dr. Archie Roberts. Due to the health risks associated with sleep apnea, David Gergen and PPHA partners have teamed up with the program to oversee that aspect of the evaluation as the experts on the sleeping disorder.

The dedication of David Gergen and NFL greats such as Roy Green, Mike Haynes, Derek Kennard, Mark Walczak and many more to spreading word of sleep apnea and getting people tested have been the driving force behind what they call the "Tackling Sleep Apnea" campaign. Stemming from their own personal struggles with sleep apnea, they are compelled to help others and together have spread the word to thousands across the United States and are even rumored to be looking into going global with PPHA’s awareness mission.

The Pro-Players Health Alliance (PPHA) is an organization dedicated to helping former NFL players, through providing testing and treatment options for those who suffer from sleep apnea. In addition, the PPHA is dedicated to integrating education and raising sleep apnea awareness, in a fun and memorable way. In addition to the campaign, the PPHA is dedicated to testing and getting people treated who suffer from sleep apnea. This has been stepped up by working though The Living Heart Foundation and its HOPE program sponsored by the NFLPA. The PPHA was created David Gergen, President of Gergen’s Orthodontic Laboratories and Former NFL legends.

David Gergen, CDT, rolled out of bed on December 4, 1982 and had his career “ah ha” moment. He knew he was going to be an orthodontic technician and he knew he was going to help people all over the country to help treat their sleep disorders in partnership with their dentists. David Gergen opened his family-owned orthodontic lab in Phoenix, AZ in 1986 and now employees over 80 people. David Gergen has been a nationally respected dental lab technician for over 25 years. He received the award for "The Finest Orthodontic Technician in the Country" given by Columbus Dental in 1986. He also received a lifetime achievement award by the Gelb Academy as America’s greatest Orthodontic technician of all time, in 2012. He has worked for some of the pioneers in the orthodontic and sleep dentistry fields. Gergen and his father John Gergen began Gergen Orthodontic labs in 1984 and have grown it into one of the most respected labs in the country. One of his proudest achievements is receiving The National Leadership award for Arizona Small Businessman of the Year in 2004. David is the Dental Director of the American Sleep and Breathing Academy and he has also taken a spot at Tufts University teaching seminars for the Continuing-Ed program on Dental Sleep Medicine.