Kitty Ganzel is a resident of Monarch Landing, a retirement community which promotes opportunities for seniors to live active and vibrant lifestyles. 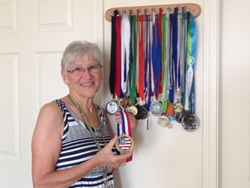 I told him, ‘here’s the deal. Grandma will go home and train and come back and run it with you next year.’

On July 4th, at the age of 70, Kitty Ganzel, a resident of Monarch Landing in Naperville, Illinois, took a first place prize in her age group at the Firecracker 5K in Warrenville.

Kitty is a self-professed late-bloomer. She waited until she was in her forties before becoming an ordained minister and a newlywed. When she was 65, she decided to start running. Not one to do anything halfway, she launched her running career by training for a 5K.

For Kitty, the decision to begin running started five years ago at the request of her then six-year old grandson who she visits every winter in Georgia. He was looking for a partner for a school 5K fundraiser. “My daughter wasn’t interested and his father wasn’t able to do it,” Kitty said. “I told him, ‘here’s the deal. Grandma will go home and train and come back and run it with you next year.’ I then joined Weight Watchers and signed up for Dick Pond’s Walk-to-Run Program,” Kitty said. “I lost 50 pounds and found out that I liked running, and have continued to do so.” She said that during their first year, they were about two and a half miles out and her grandson was exhausted. “I told him that it was okay not to finish and that I was so proud of him. I ran ahead and a few second later he went zooming by me shouting, ‘not today grandma!’ He crossed the finish line right in front of me…he was all arms and legs.” Kitty has repeated the 5K fundraiser every year since, even though her grandson no longer does.

She also started competing in 10K’s and last year completed her first half-marathon. She’s gradually taken on longer races she said, because she likes the extra challenge and treasures the encouragement from her children who are runners. Her husband Joe, who is her most avid supporter, rides his bike behind her during training runs, cheering her on.

When Kitty moved to Monarch Landing earlier this summer, she discovered she could pursue her joy of running along the Prairie Path which she can access from the community. She greatly enjoys the route. Kitty learned about the Firecracker 5K in neighboring Warrenville and decided to enter it. Completing 10 minute 45 second miles, Kitty said her timing was “alright for me” as she tries to stay under 11 minutes. She keeps her medal along with an impressive collection from other races, hanging on a rack in her apartment.

Kitty is excited to have the opportunity to do some more late blooming at Monarch Landing. “The motto here is 'Settle In. Branch Out.' That’s what I feel like I’m doing. I’ve started taking a water aerobics class and also the bike club,” she said. Kitty’s also joined a BUNCO group and volunteers on the library committee.

Monarch Landing is a continuing care retirement community located on a scenic campus in Naperville, Illinois-named “one of America’s best places to live and retire” by Modern Maturity, and “the best city for early retirement” by Kiplinger. Monarch Landing currently offers independent living, promoting a vibrant life style for active seniors. Upon completion of The Springs at Monarch Landing which is currently under construction, the community will also offer assisted living memory support, rehabilitation and skilled nursing services, thus providing complete continuing care for seniors. Monarch Landing is owned by Senior Care Development and managed by Life Care Services. For additional information visit http://www.WelcomeToMonarchLanding.com or call 630-548-0400.