Faith Film From Creators of COURAGEOUS Highlights Power of Prayer, a Regular Practice for Nine of 10 Americans 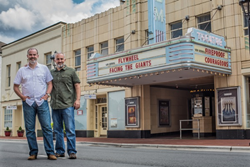 Alex and Stephen Kendrick—creators of hit faith films FIREPROOF and COURAGEOUS—have just wrapped principal photography on their anticipated fifth movie—a family drama with humor and heart focused on the power of prayer and its primary role in the Christian life.

“We made this film to inspire, challenge and motivate families to fight the right kind of battles and to fight them the best way possible,” said Director and Co-Writer Alex Kendrick. “We have plans for everything—careers, finances, health. But what about a strategy for prayer for our lives, our spouses and our children?”

The Kendricks’ fifth film is their first project independent of Sherwood Pictures, the movie ministry of Sherwood Baptist Church. Pre-production began in 2013 with the blessing and support of the Sherwood family, where they remain associate pastors.

“Sherwood is still our church home, and we’re here talking to you now only because Michael Catt, our pastor, took a risk, supported us and let us make a movie,” Alex Kendrick said.

Provident Films and AFFIRM Films partnered with the brothers to distribute their fifth movie.

“I'm honored to be working with the Kendricks, and to be part of a story that encourages people to pray,” Shirer said. “Prayer is the most powerful weapon the church has to unlock the activity of heaven on earth.”

Filmed in and around Charlotte, N.C., this is the first Kendrick Brothers project shot outside their hometown of Albany, Ga. It drew more than 1,000 volunteers from 85 churches in the Charlotte area who stepped up and reached across denominational lines to support the production.

“It's time for fierceness in prayer, and I cannot think of a more crucial message for a movie to convey,” Moore said. “God waits to see a generation that will take Him at His Word. Let's be that generation.”

“We’re going after something here that could radically improve our culture, and moviegoers will experience it within the context of an inspiring and emotional story,” Producer and Co-Writer Stephen Kendrick said. “Prayer is so much more than people realize. It can powerfully affect every problem and need in our lives if engaged from within a vibrant relationship with God.”

SYNOPSIS
A family-friendly drama, the film is about learning to fight the right kinds of battles. Filled with humor, wit and heart, it follows Tony and Elizabeth Jordan, a middle-class couple, and their daughter, Danielle, as they struggle through personal, marital and spiritual issues. Their lives are forever changed after Elizabeth meets an elderly widow who helps her develop a secret prayer room in her home.

PRAYER IS FREQUENT . . . AT HOME
Each Kendrick Brothers film explores a subject deeply important to Christians and the Christian life: personal integrity in FLYWHEEL, resilient faith in FACING THE GIANTS, loving marriages in FIREPROOF and heroic parenting in COURAGEOUS.

This film’s focus on prayer strategically highlights a subject of interest to a majority of Americans. According to a National Opinion Research Center survey on frequency of prayer, nearly 90 percent of Americans claim to pray regularly. Some 60 percent say they pray at least once a day—for Christians, that number grows to 84 percent, according to a U.S. News and Beliefnet online poll. Almost 80 percent of American Christians say they pray most often at home.

About Kendrick Brothers Productions KendrickBrothers.com
Kendrick Brothers Productions is the company of brothers Alex, Stephen and Shannon Kendrick that exists to honor Jesus Christ and make His truth and love known among the nations through movies, books, curriculum and speaking. By prayerfully blending engaging stories with scriptural integrity, the Kendricks seek to encourage and inspire viewers and readers with resources that impact their daily lives and strengthen their families and personal relationships.