The School of Hotel and Tourism Management (SHTM) at The Hong Kong Polytechnic University (PolyU) released a report on the PolyU Tourist Satisfaction Index (PolyU TSI) and the Tourism Service Quality Index (PolyU TSQI) on 29 July 2014, presenting the PolyU TSI for Hong Kong from 2009 to 2013 and the PolyU TSQI from 2012 to 2013. The 2013 PolyU TSI hit a record high of 75.96. As another innovative gauge for service performance, the debut PolyU TSQI stood at 77.30 for 2013. 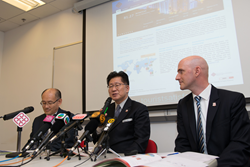 Members of the PolyU TSI and PolyU TSQI research team

The PolyU TSI and TSQI frameworks would contribute to the sustainable tourism development by helping tourist destinations to become more competitive.

The 2013 PolyU TSI hit a record high of 75.96, increasing 0.89 points from 75.07 in 2012. The index measures inbound tourists’ satisfaction levels across six tourism-related sectors and integrates them into an overall index. The 2013 index indicates that tourists have become increasingly more satisfied with Hong Kong over time.

The index shows that the sectors consistently excelling in service performance in Hong Kong are attractions (79.27) and transportation (78.58). Immigration (76.55), hotels (73.93), retail shops (73.63) and restaurants (73.36) have also managed to exceed tourist expectations. Over the 2009-2013 period, transportation earned the highest tourist satisfaction index with an average of 78.28.

The measurement of tourist satisfaction with Hong Kong spanning five years from 2009 to 2013 has revealed the stability of the market-level index, with Australia, New Zealand and the Pacific scoring the highest (81.29), followed by the Americas (81.27), Europe, Africa and the Middle East (79.27), South and Southeast Asia (76.48), Mainland China (73.97), Taiwan and Macau (71.66) and Japan and Korea (67.59). Over the period, the Americas received, on average, the highest tourist satisfaction index of 79.60.

The PolyU TSI evaluates service sector competitiveness not only over time but also across international tourist destinations. In fact, the Indices have been adopted by an increasing number of destinations, including Macau in 2010 and China’s Guangdong province in 2012. “We are advancing the index in two directions,” explained Professor Haiyan Song, SHTM Associate Dean and Principal Investigator of the PolyU TSI, “first by the introduction of the PolyU TSQI in 2012 and then by continuing to collaborate with destination management organizations worldwide to establish a widespread framework for measuring destination competitiveness based on tourist satisfaction.”

The PolyU TSQI score was 77.30 for 2013, which was 1.34 points higher than the PolyU TSI of 75.96 for the same year. The deviation between the two indices helped detect areas where service performance failed to boost tourist satisfaction. “With such a comprehensive and sophisticated system of measuring the level of satisfaction of customers and service quality of suppliers, the PolyU TSI and TSQI frameworks would contribute to the sustainable tourism development by helping tourist destinations to become more competitive. It also ensures that tourists enjoy their travel experience to the full,” Professor Kaye Chon, SHTM Dean and Principal Investigator of the PolyU TSQI said. “We at the SHTM are committed to bringing cutting-edge research to business practice and thereby addressing the global challenges that tourism faces.”

About PolyU’s School of Hotel and Tourism Management

PolyU’s School of Hotel and Tourism Management is a world-leading provider of hospitality and tourism education. It was ranked No. 2 internationally among hotel and tourism schools based on research and scholarship, according to a study published in the Journal of Hospitality and Tourism Research in November 2009.

With 65 academic staff drawing from 20 countries and regions, the School offers programmes at levels ranging from Higher Diploma to Ph.D. Currently a member of the UNWTO Knowledge Network, the School was bestowed the McCool Breakthrough Award in 2012 by the International Council on Hotel, Restaurant, and Institutional Education (I-CHRIE) recognizing its breakthrough in the form of its teaching and research hotel – Hotel ICON – the heart of the School’s innovative approach to hospitality and tourism education.